We got a ride out of Wrightwood from a mom who just dropped her kids off at school. I think everyone in this town knew about us hikers and their eagerness to help made it that much harder to leave. But we had 1 day of nice weather to summit Mt. Baden-Powell and descend to lower elevations before the weather turned ugly.

Summiting Baden-Powell reminded me a lot of summiting San Jacinto. At a certain point the switchbacks just turned into footsteps going straight up the mountain through the snow. 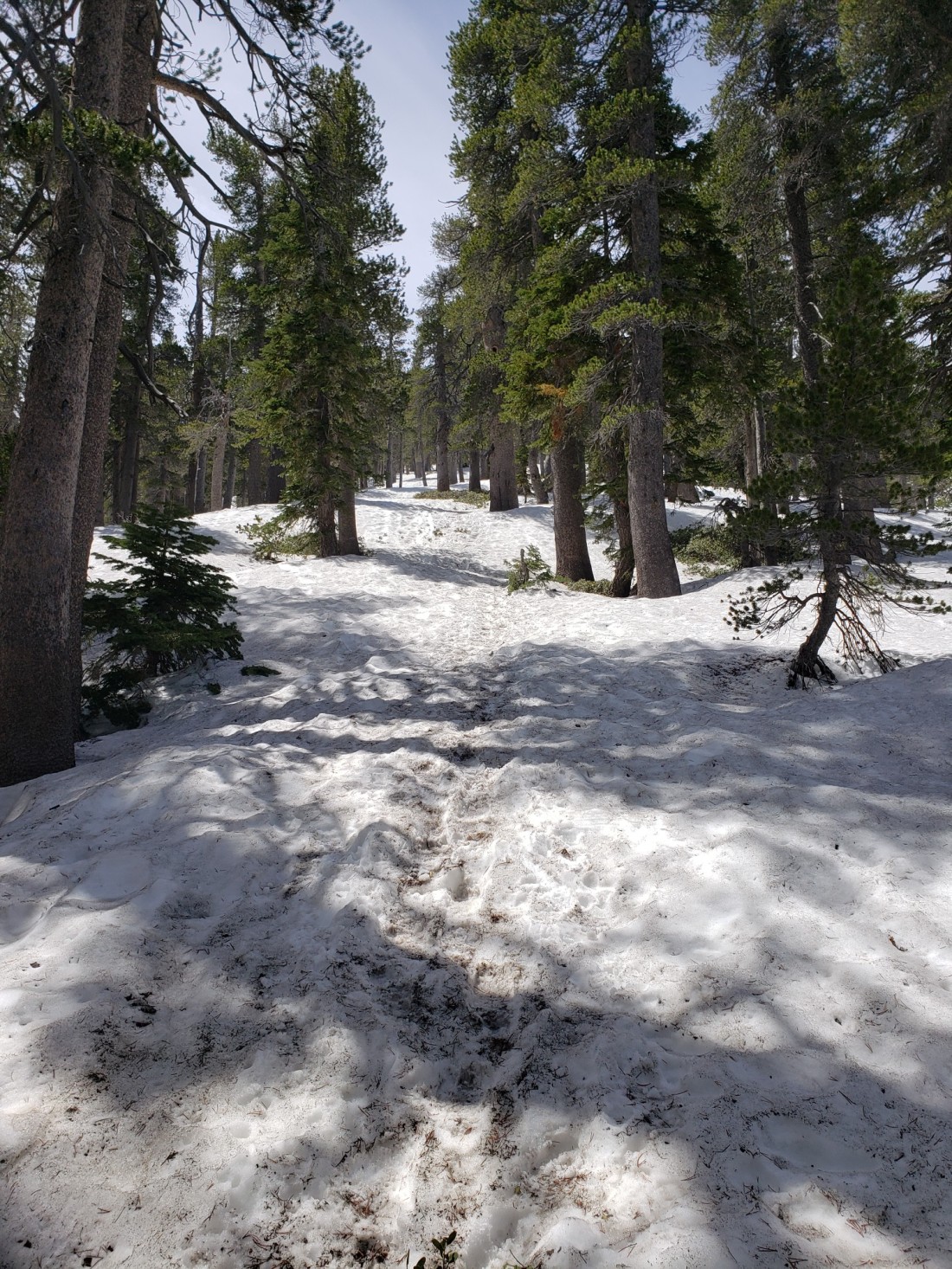 It was tough going, no doubt about it. Every step took a tremendous amount of energy and despite all the snow I was sweating like crazy. We went straight up like this for about a mile. 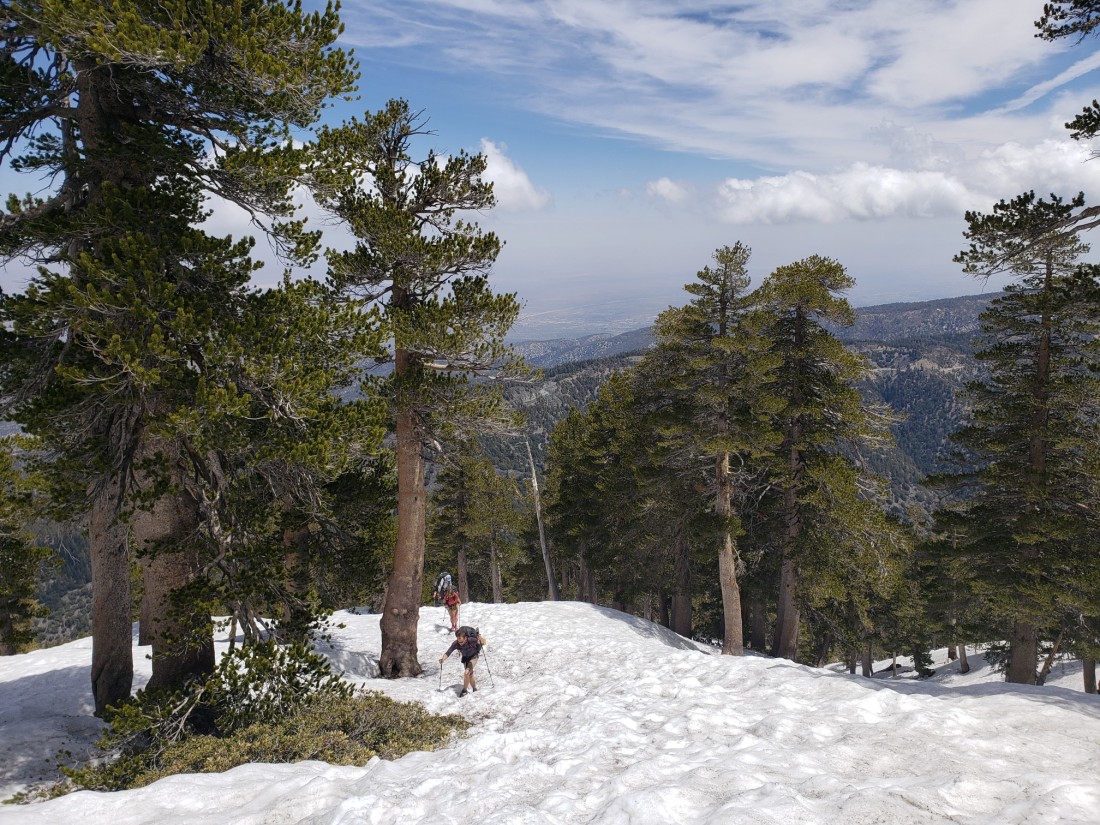 All the hard work paid off when we reached the summit. It was a beautiful day to enjoy the beer I had packed out of town to celebrate the occasion. 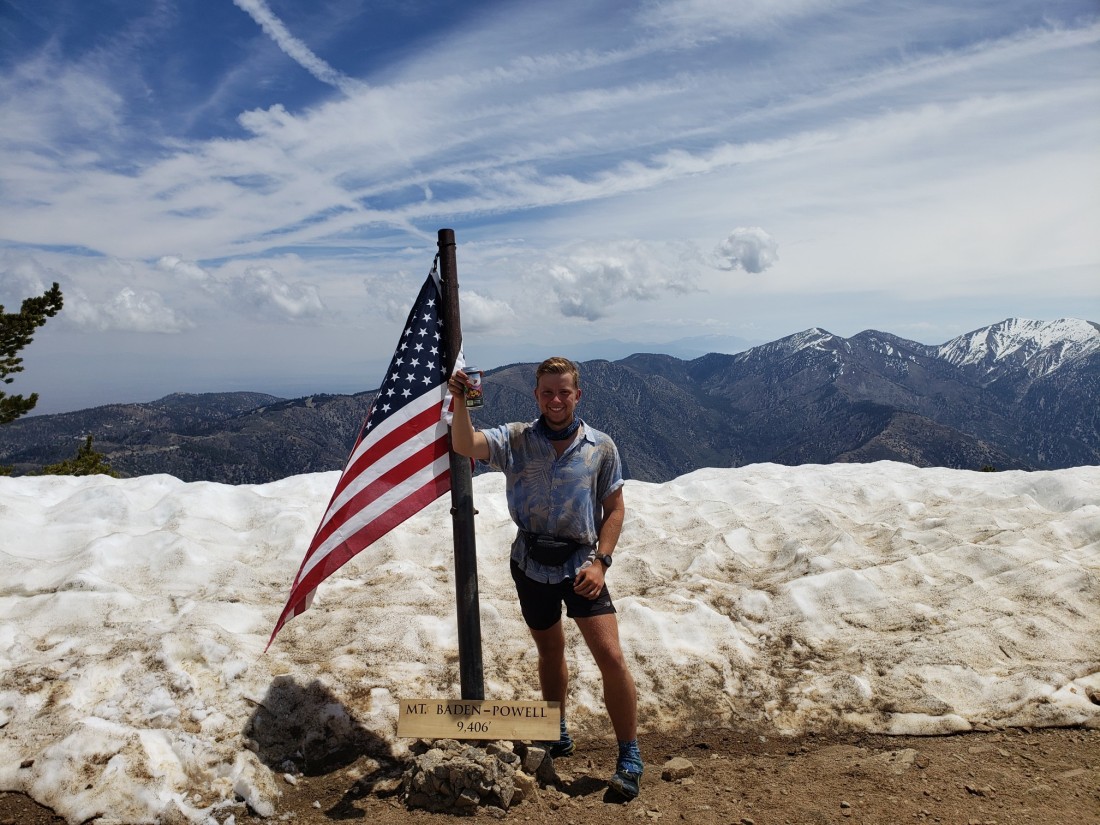 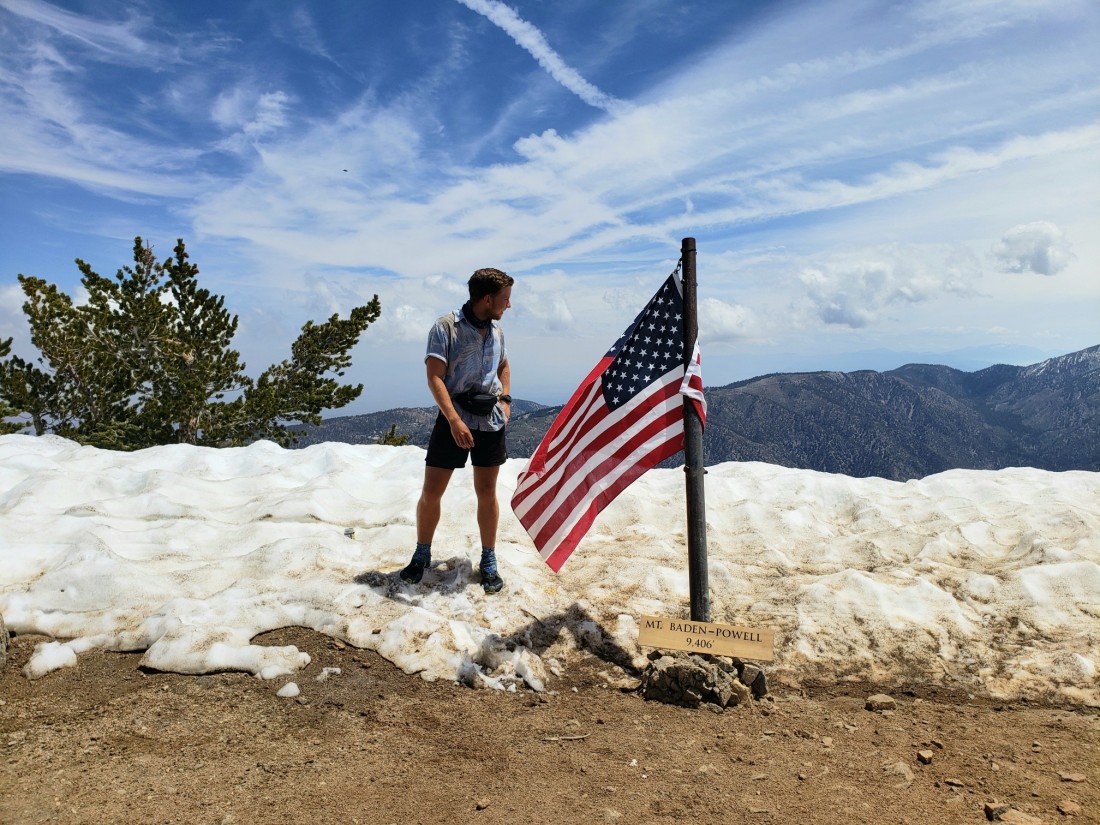 We had lunch at the top with some other hikers then decided to push down the mountain quickly because some nasty weather would be moving in at night. It’s not a good idea to be at higher elevations with storms moving in, just a general rule of thumb. 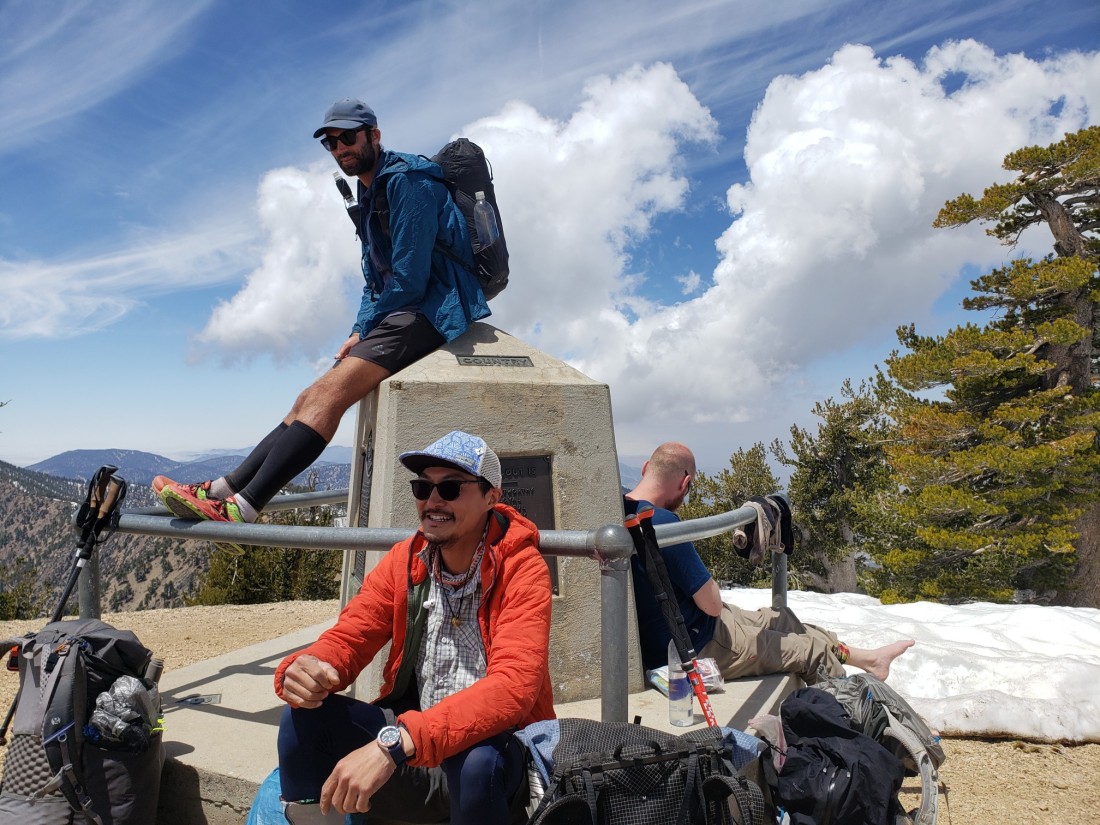 Before we left we had to sign the trail register and check to see when some of our other friends had passed through. 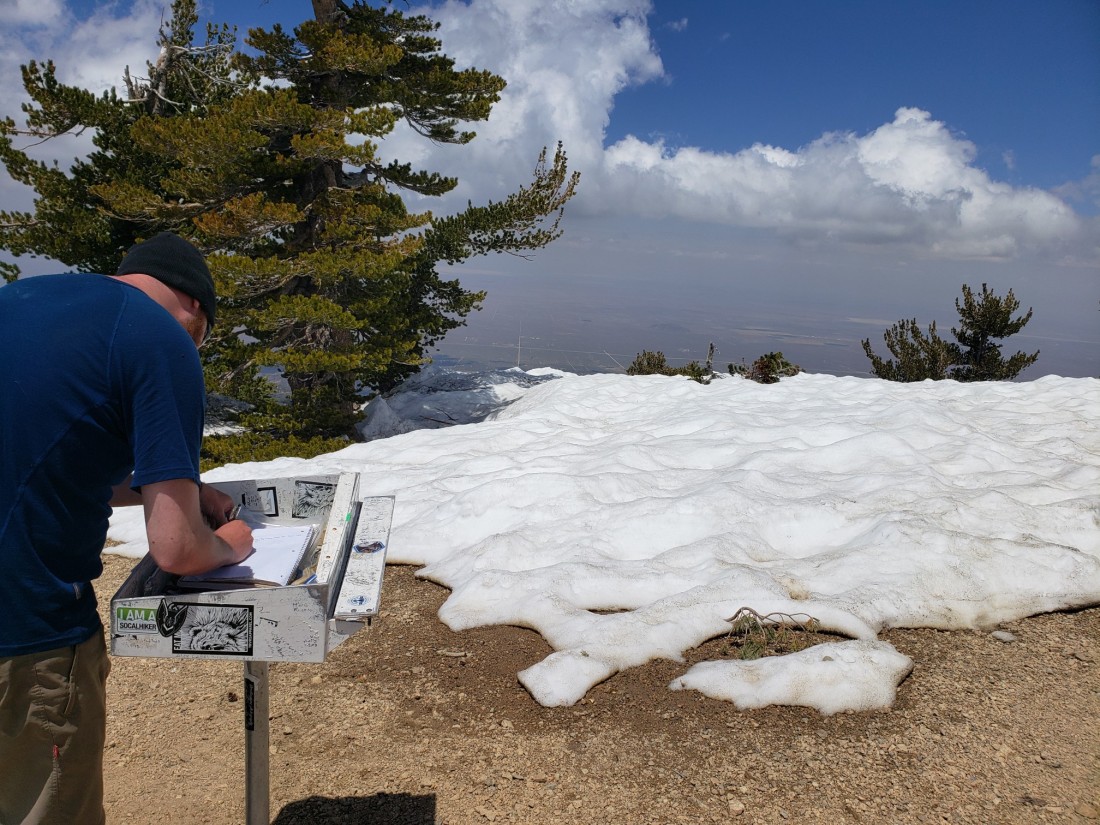 The descent was tough as we tried to avoid the snow but the view of the clouds below us made it all worth it. Normally we might be able to see LA down there but the clouds covered everything. 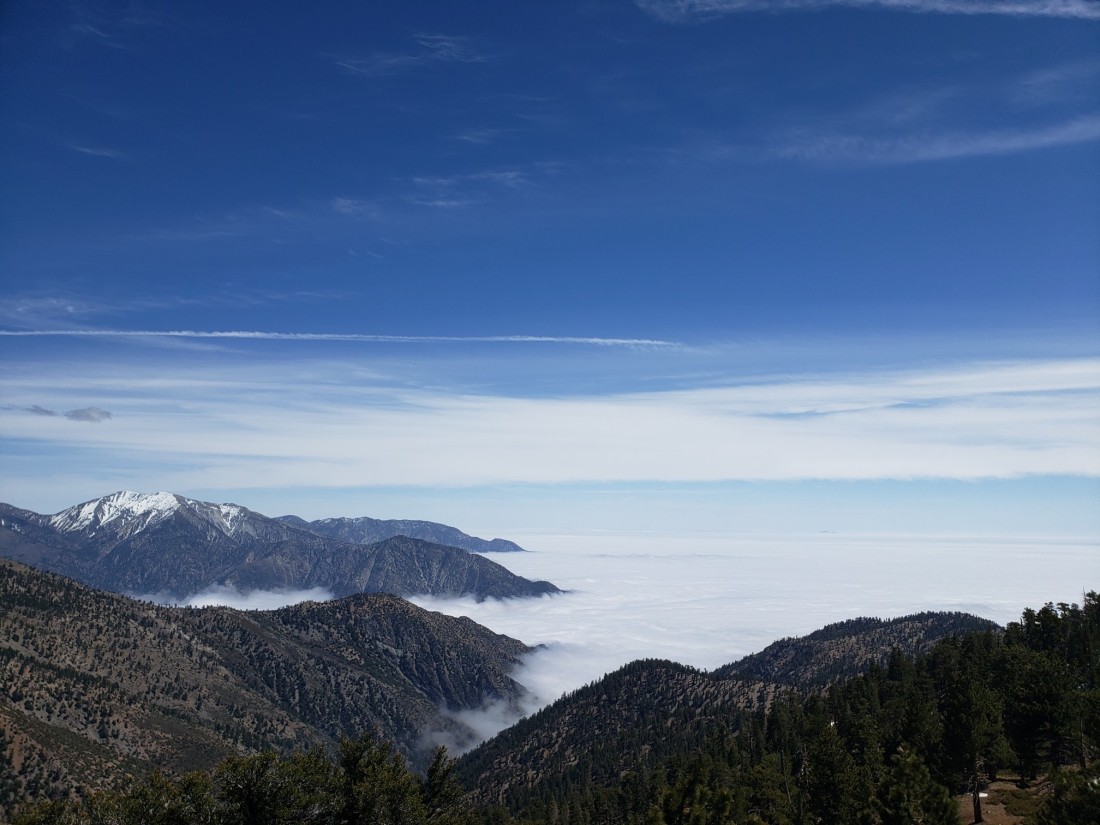 We got a great campsite with tables and a bathroom at around 6000 feet so we’d avoid some of the weather. 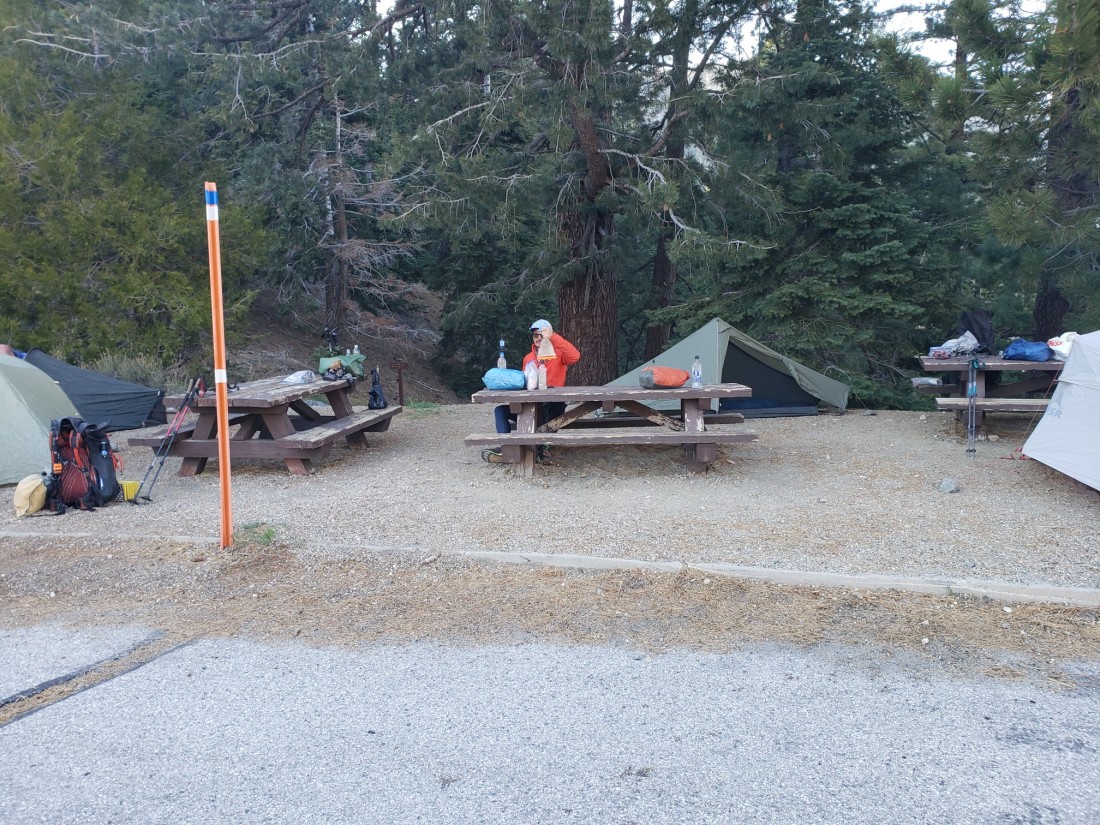 The clouds just below our campsite were creeping up ever so slowly, however. 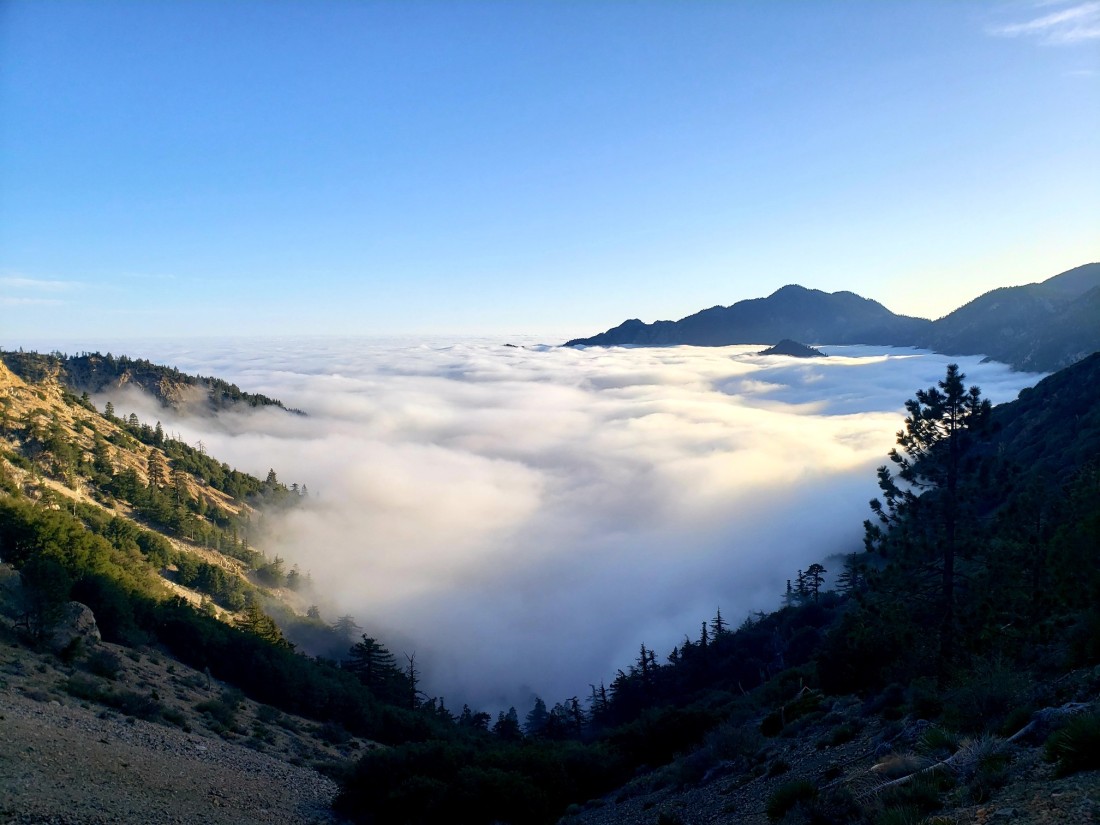 We woke up in the clouds that were creeping up to us the night before. 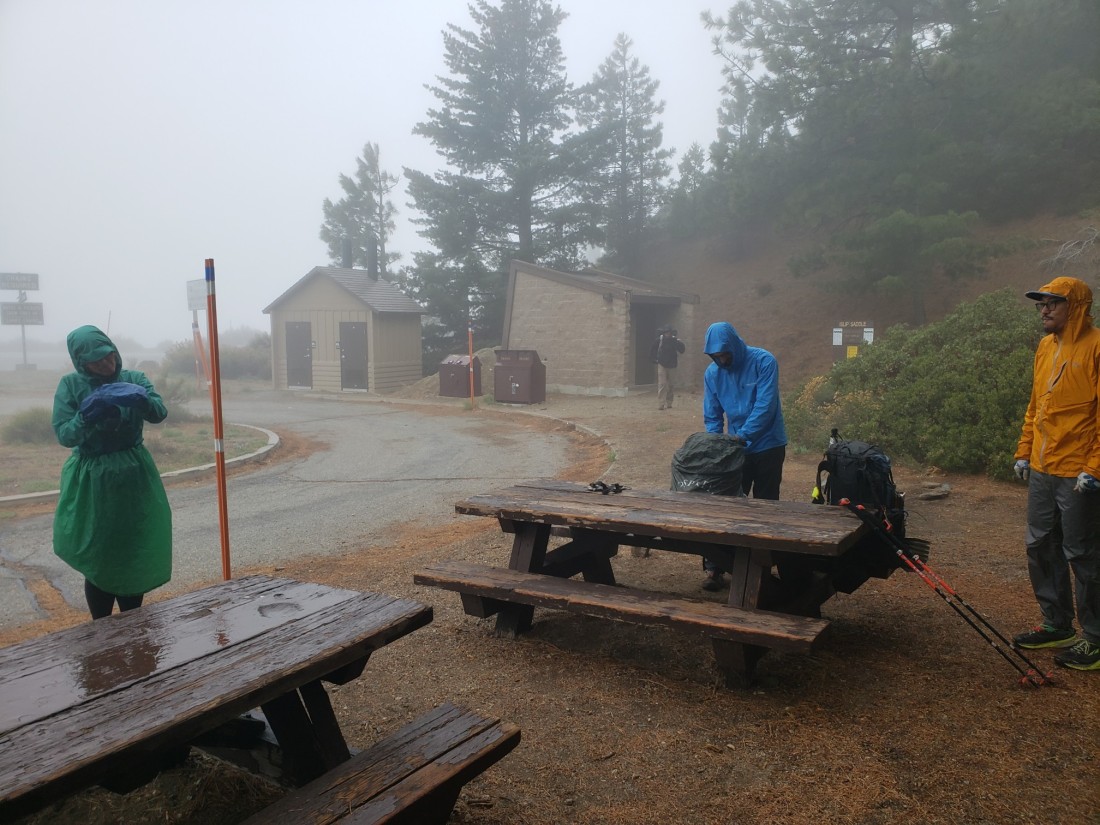 It rained a little bit at night but it was mainly just the mist and fog from the clouds which had gotten everything wet. It’s never fun packing up all your gear wet but sometimes you just have to do it.

We had to walk along the road for quite a ways due to an endangered species detour. This is when it began to rain pretty steadily. 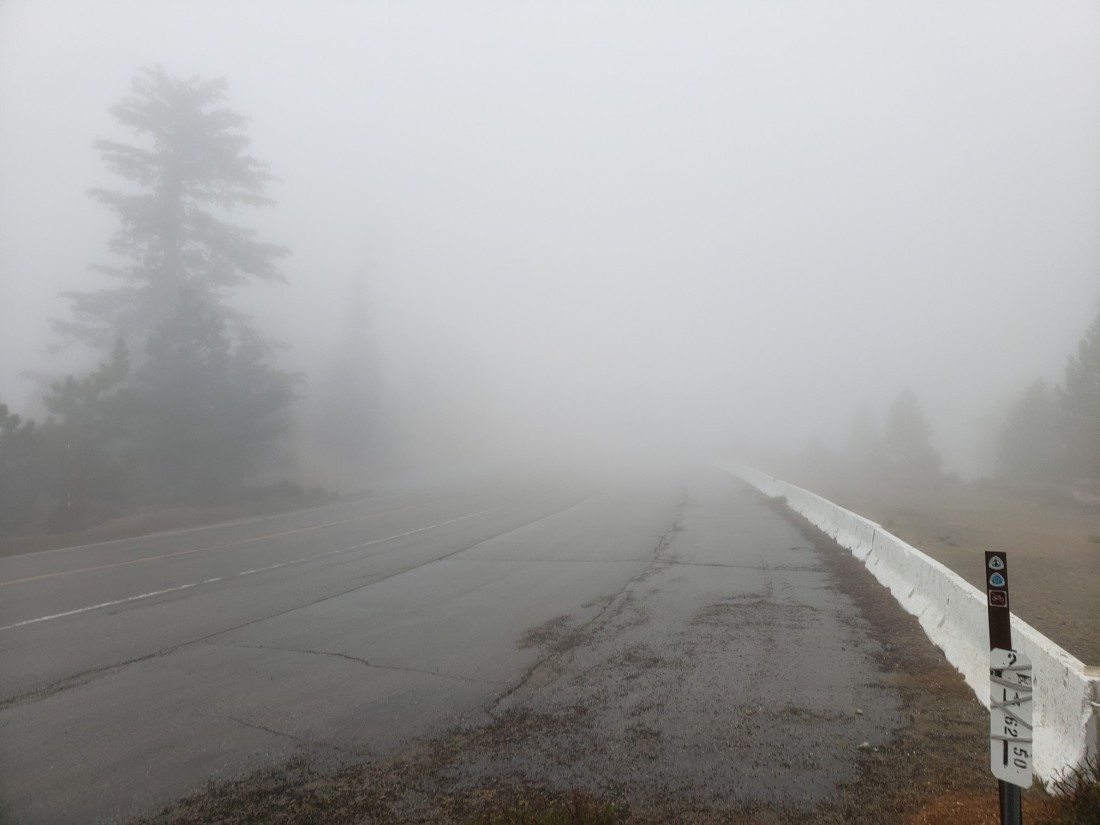 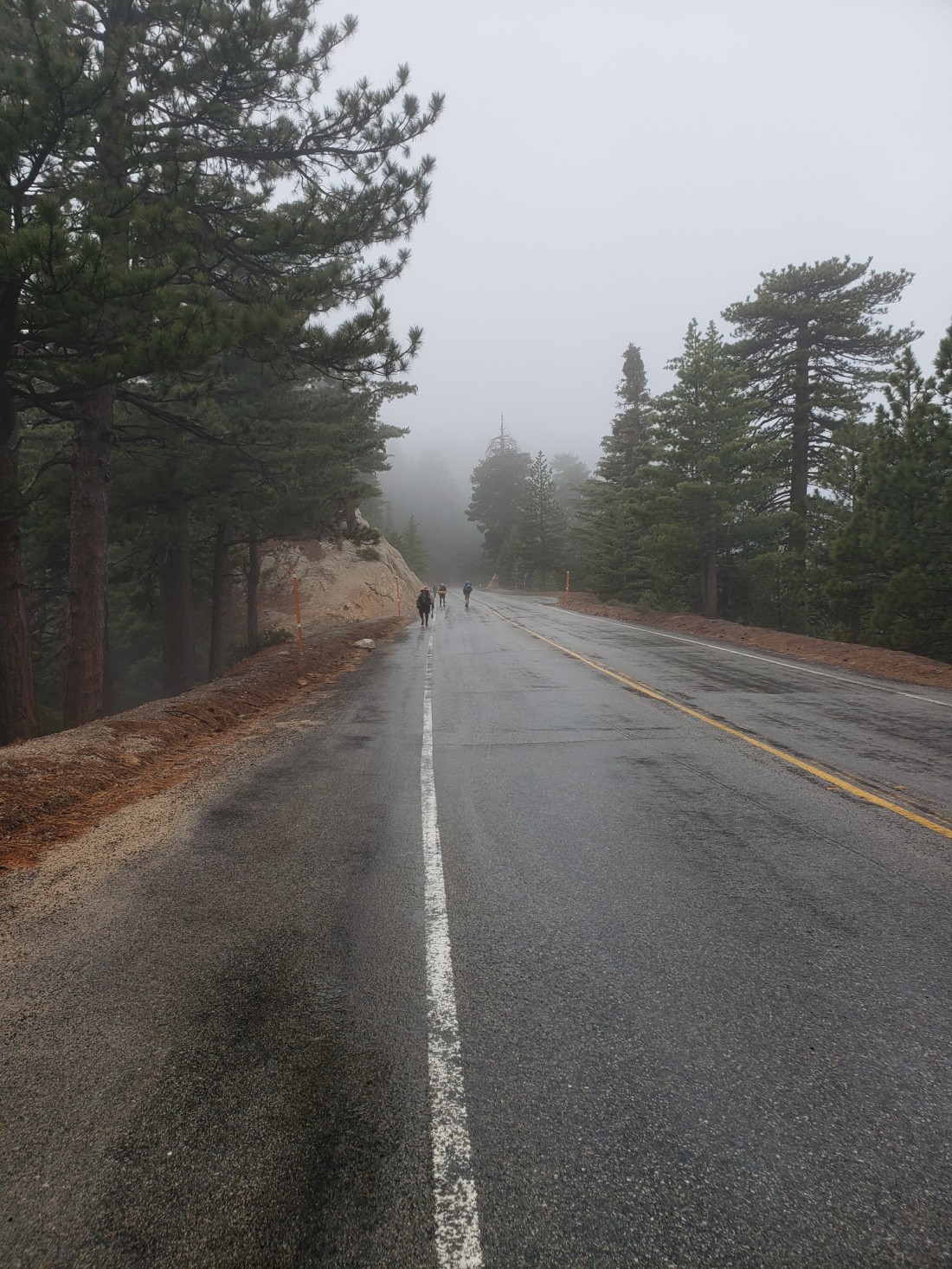 The rain was cold and my hands were not having it. I decided to put on my non waterproof gloves and then just wear zip lock bags over them to keep them dry. I wish I got a picture because it actually worked pretty well even though I looked really silly.

We stopped for lunch and for the briefest of moments the sun came out and we rejoiced. 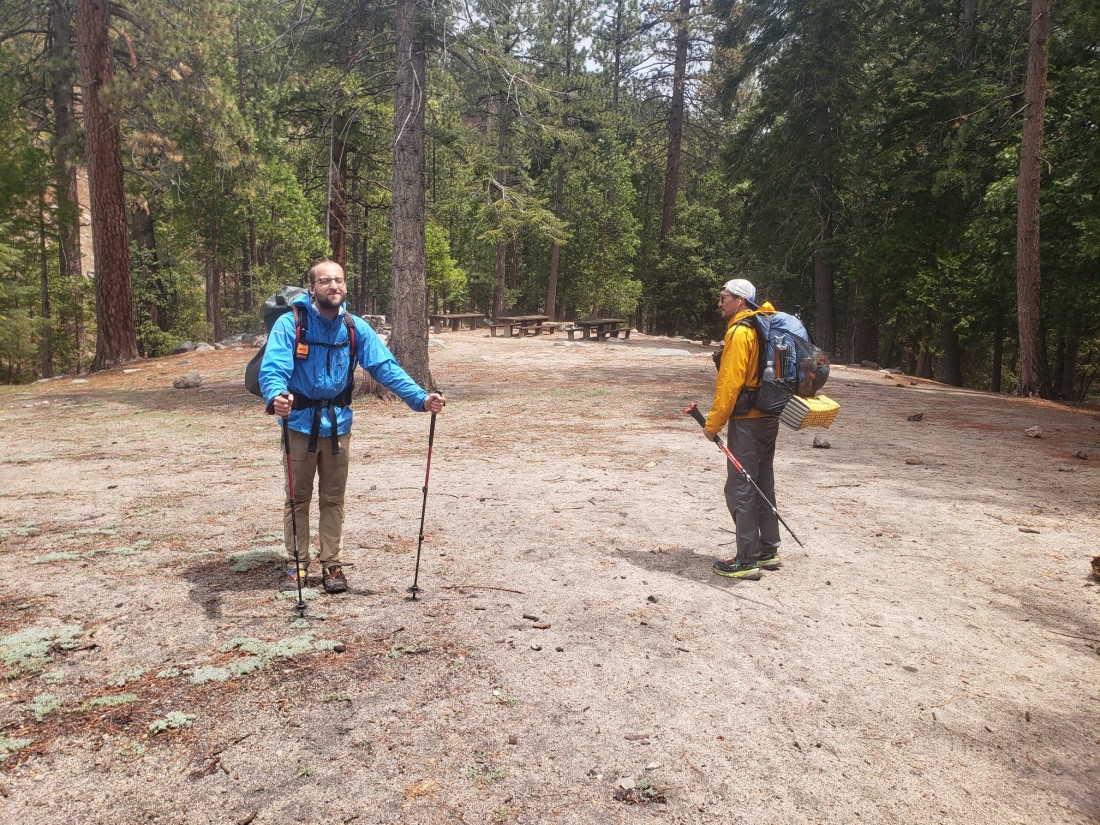 We stood there trying to dry/thaw out before it went away again. We felt like all the sunbathing lizards we passed in the desert back when it was actually sunny. Oh well, it was nice while it lasted.

The clouds did make for some pretty pictures. It sure didn’t feel like we were in Southern California. I mean just look at this. 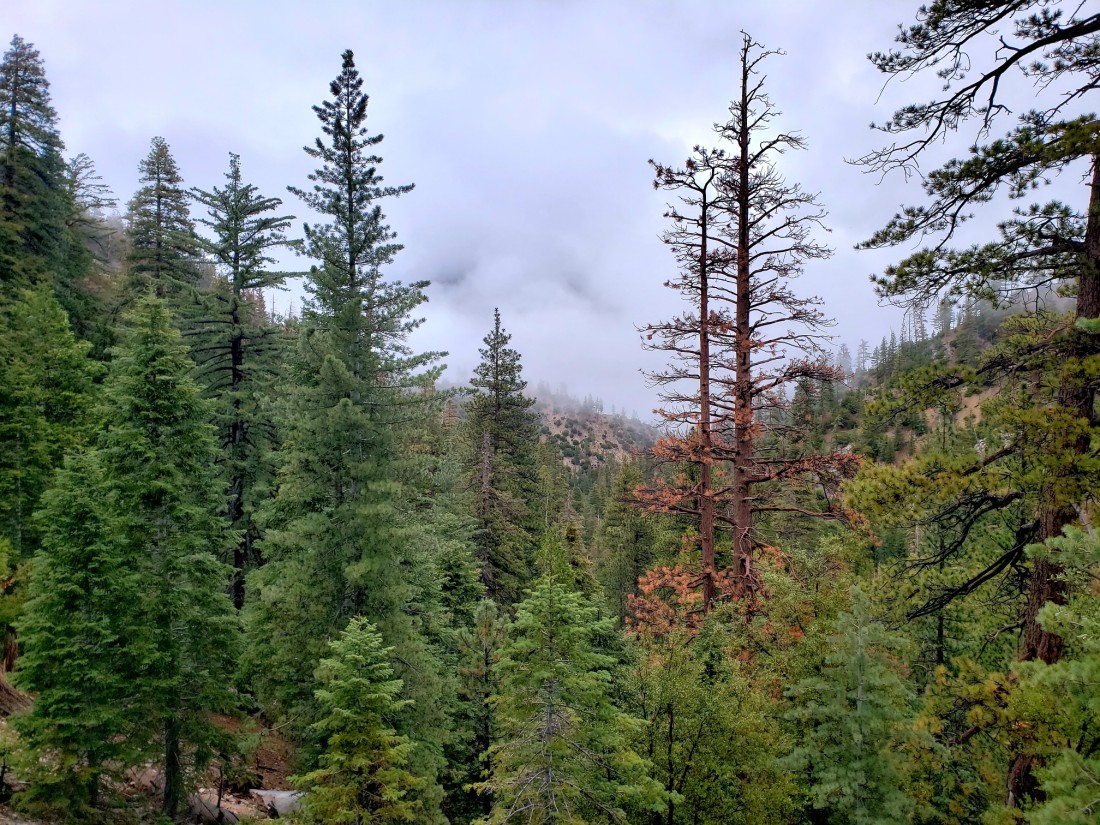 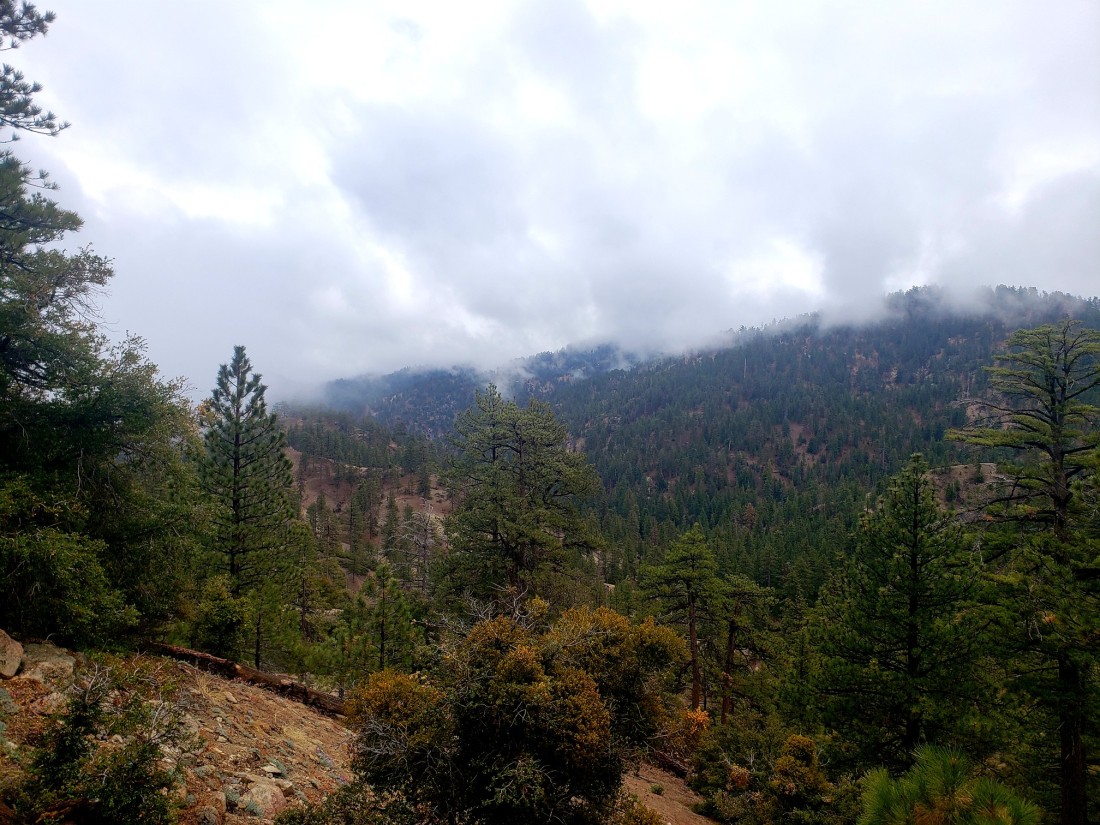 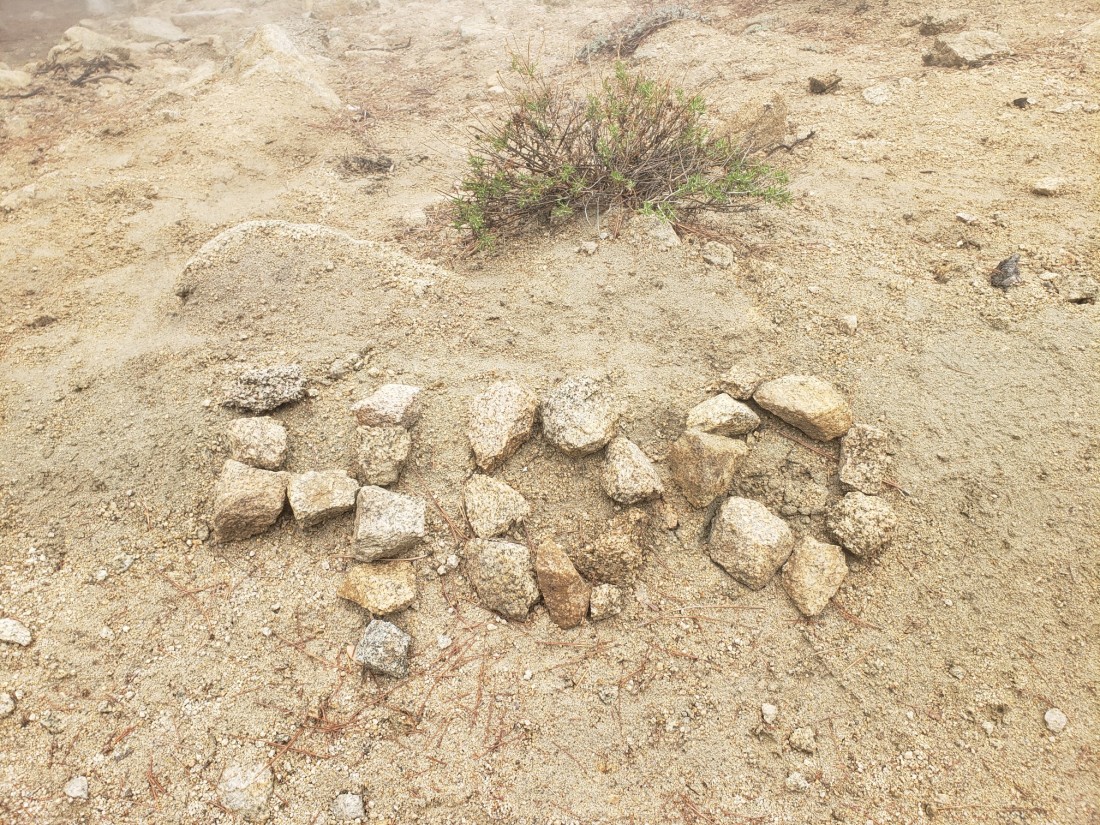 Anyone know what these weird plants were we saw sprouting up all over the place? Our best guess was some kind of alien species that accidentally landed here because they looked so put of place. 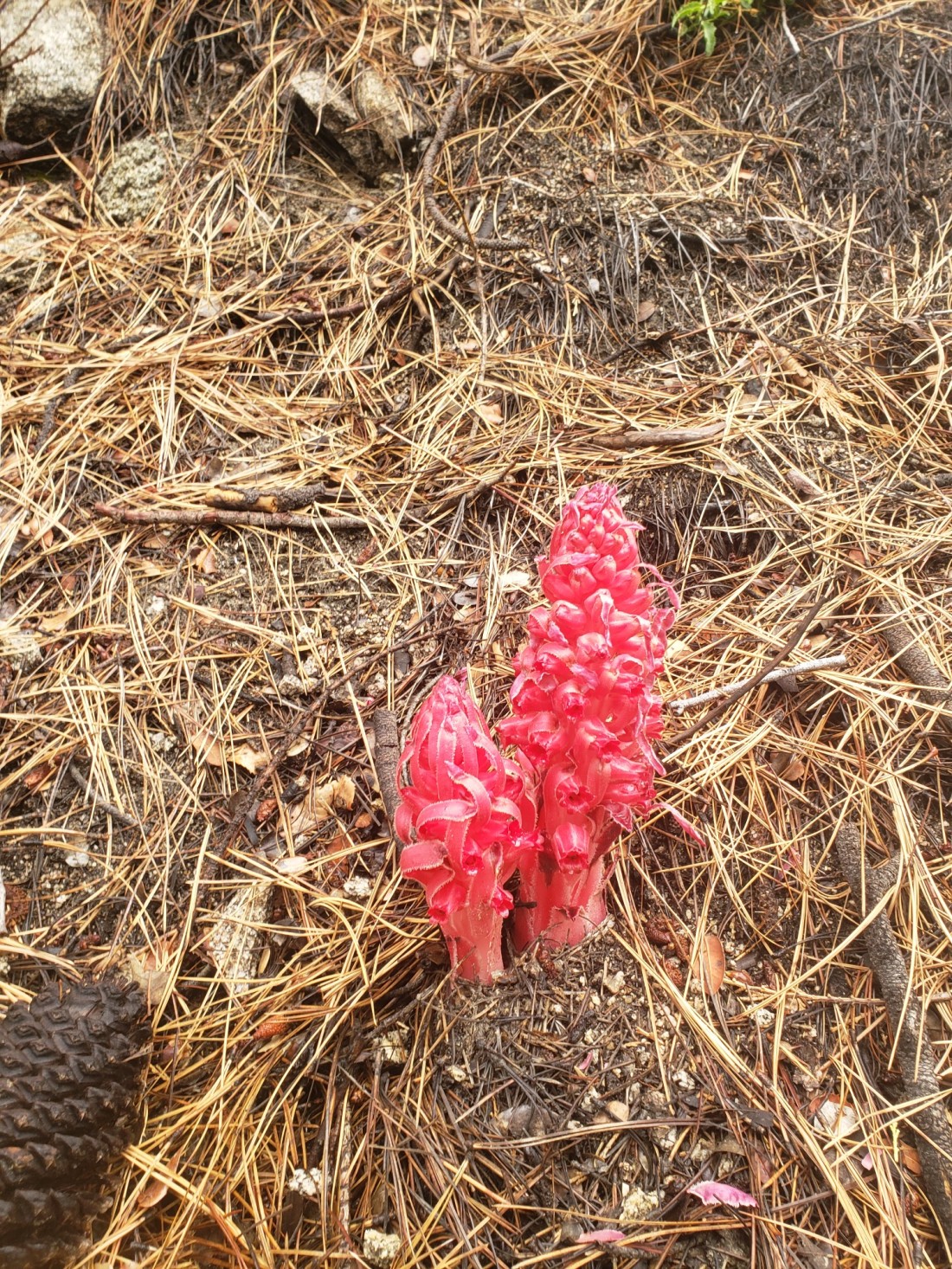 Thankfully this morning seemed to be a little bit clearer. The clouds parted and our moods lifted. 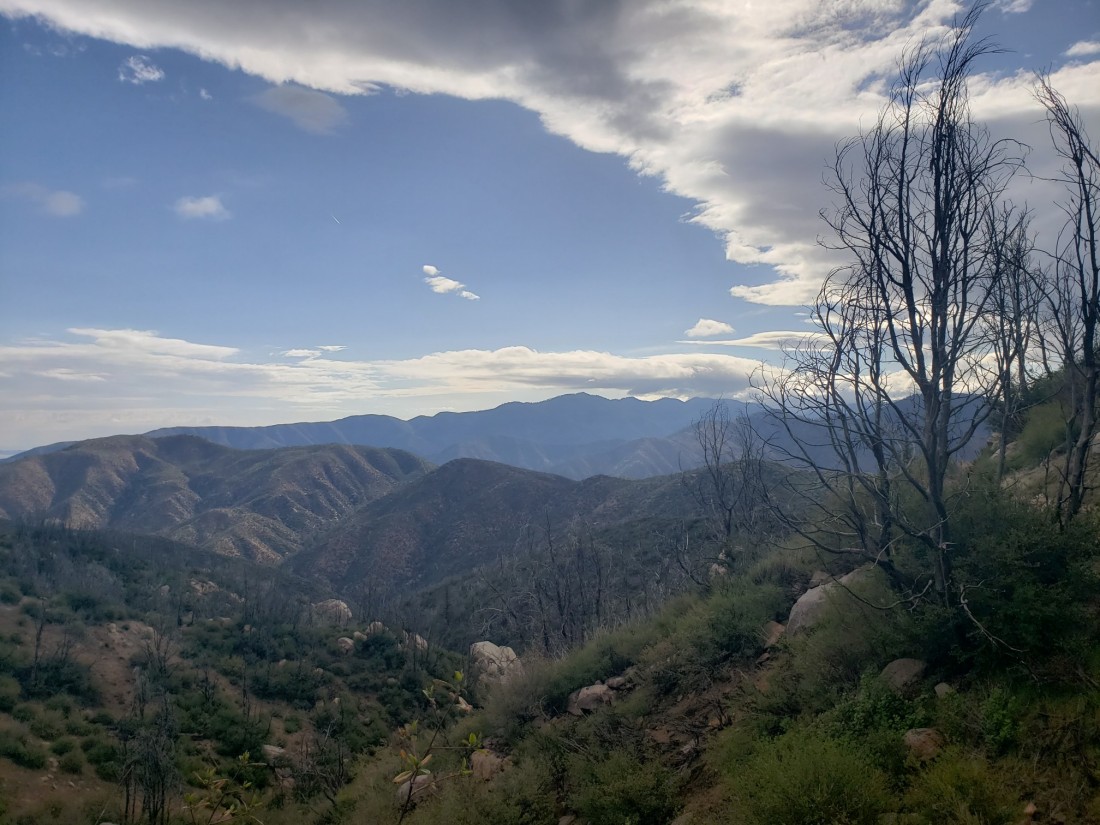 By now I’d seen lots of snakes – rattlesnakes especially often. But this was the first really unique snake I’d seen. I remembered the rhyme, “red on black, friend of Jack” so I knew we weren’t in any danger but I still didn’t want to put my life in the hands of a folksy old saying. Regardless, it seems to be a baby Kingsnake from my research. 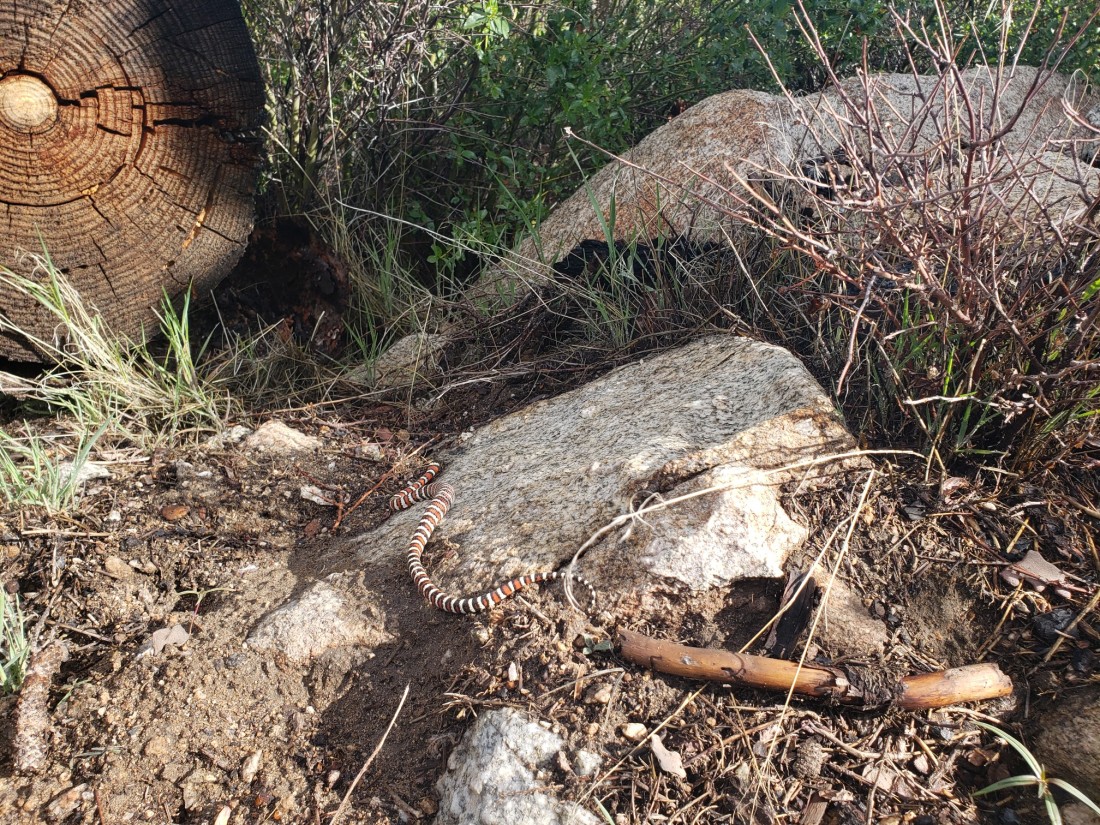 Poor guy was tiny and right on the trail. We ushered him to the brush where he’d be safe.

While the sun was out we all used the opportunity to dry out our gear from the previous day. 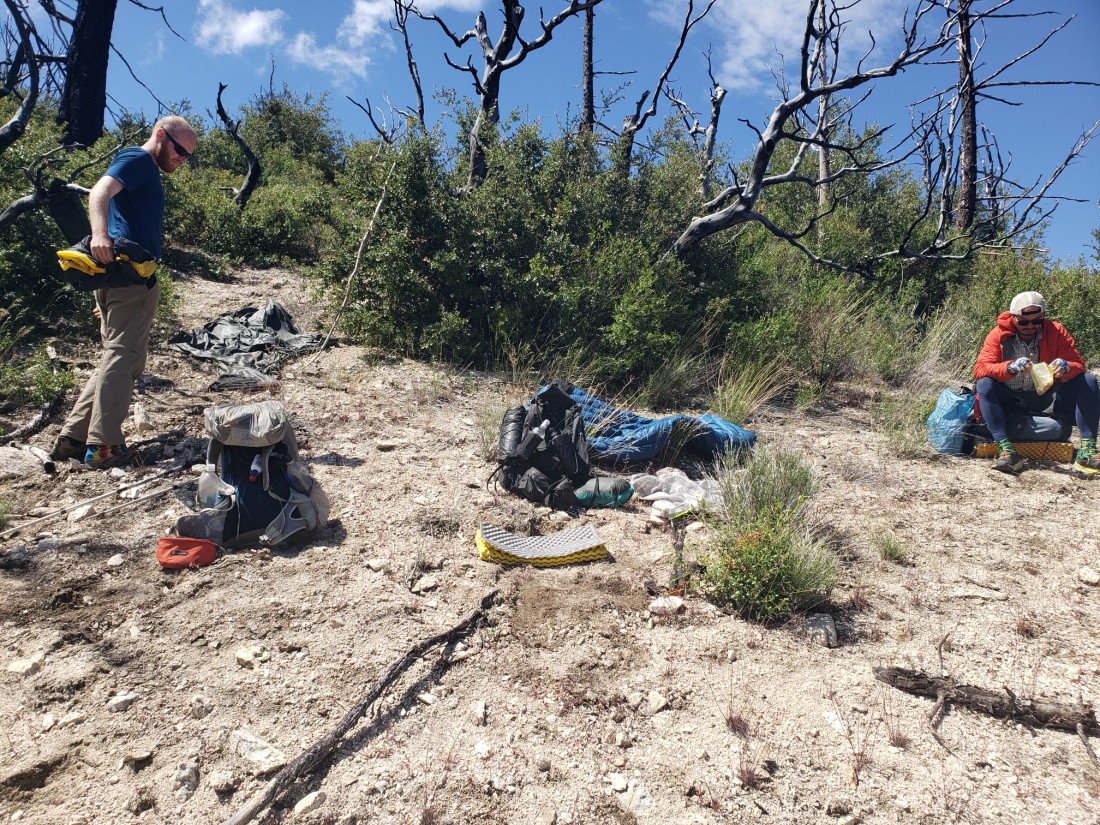 Some day hikers were coming around the corner and we heard them say, “look at all this trash” as they just glimpsed our gear drying out. When they saw us alongside the gear one of the guys joked that it wasn’t actual trash, just hiker trash. Quick note on lingo, “hiker trash ” is a term of endearment and pride for thru hikers. It’s hard to explain but at a certain point you just embrace the silliness and vagabondy nature of what you’re doing. Here’s a good article explaining the term (for the Appalachian trail, but applies to the PCT too).

To live up to our hiker trash name, we decided to order pizza from the trail to the nearby fire station for lunch. And it worked surprisingly well – the pizza placed was used to delivering pizza to hikers at this spot. It was completely worth it. 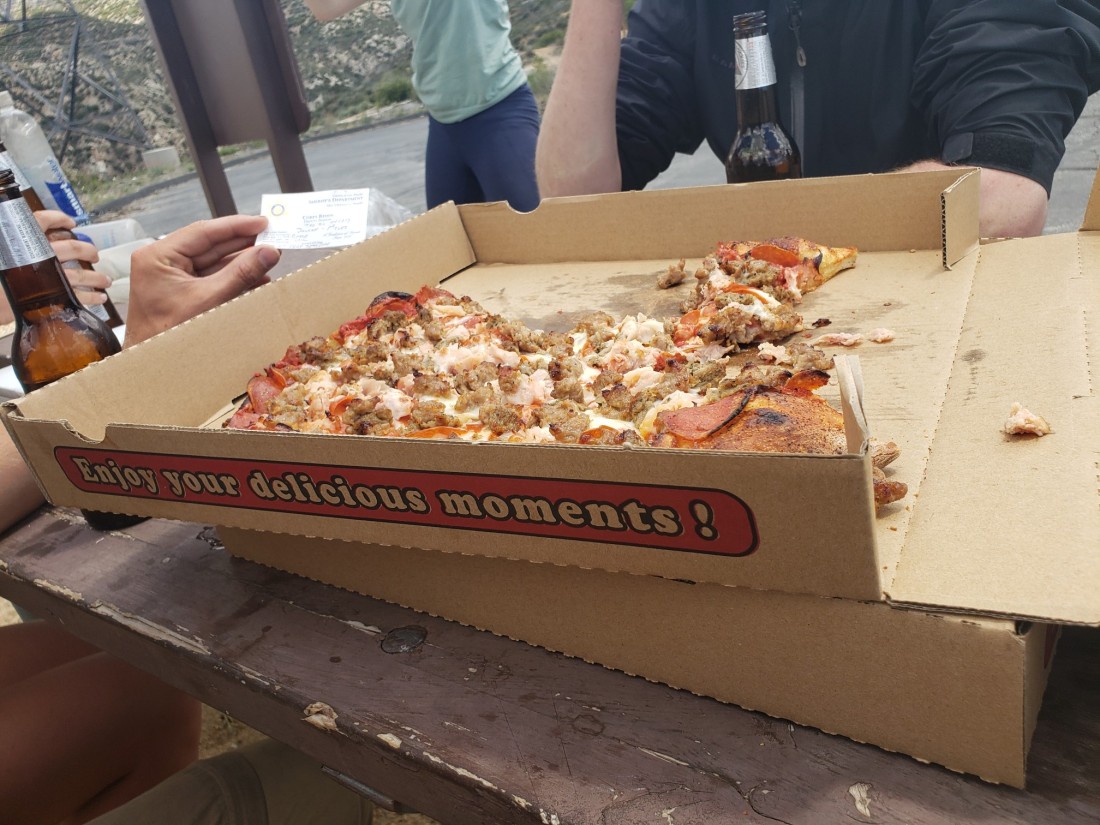 Unfortunately the pizza destroyed our ability to hike and we all passed out under the sun for about an hour. Hikers can sleep anywhere. 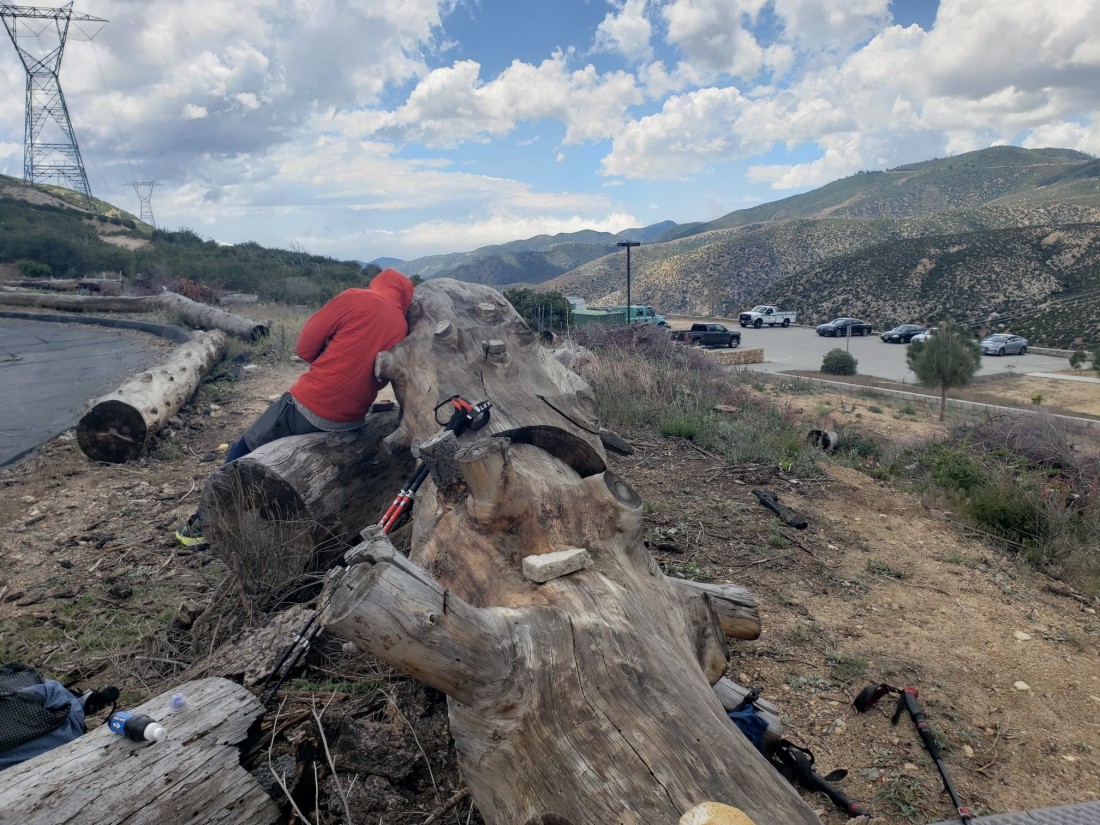 It was nice to see this little sign around the same time. For some reason people around here like to take care of thru hikers. 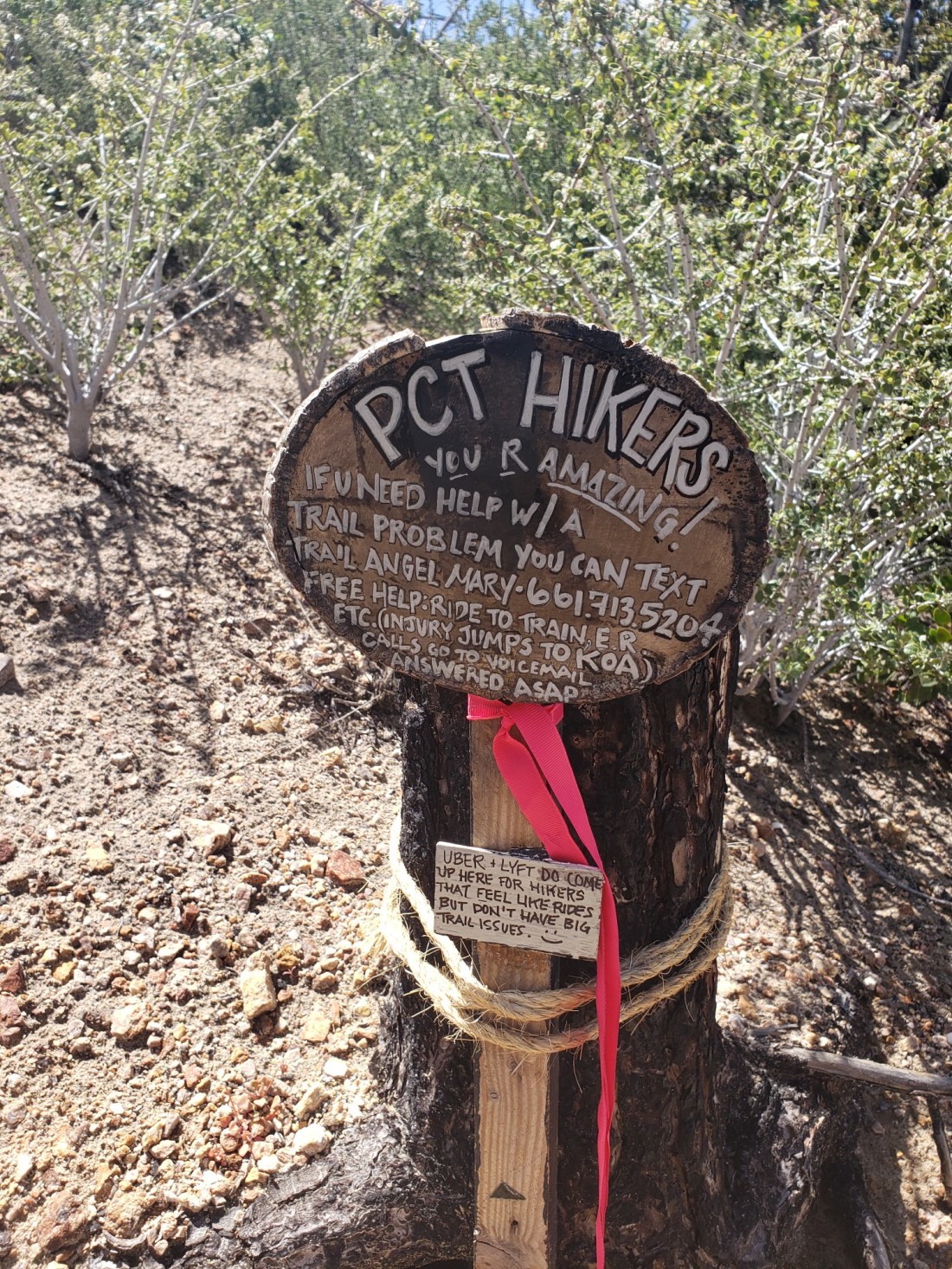 Just when we were beginning to enjoy the sun and warmth, some nasty clouds rolled in to ruin our fun. And they rolled in fast. 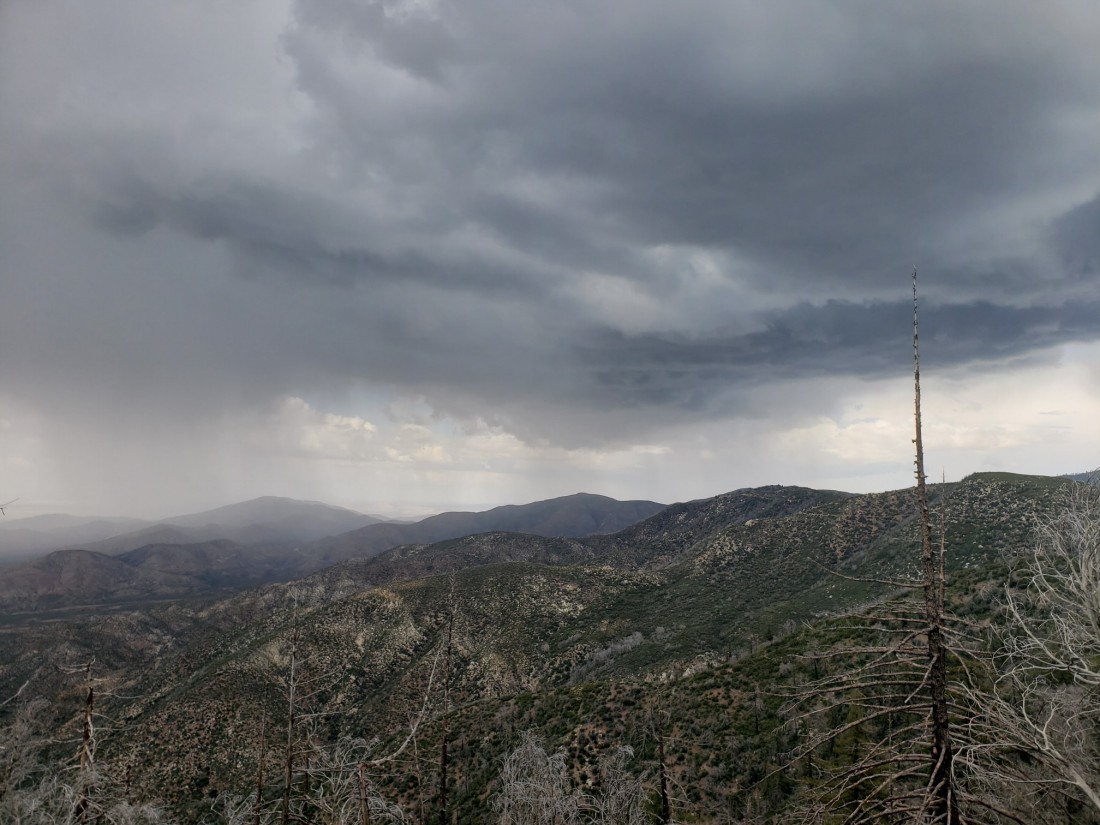 Honestly, this was one of the scariest moments on the trail for me so far. The thunder was insane and lighting began to flash closer than I’d like. To top it off I was the tallest object on an exposed hill. After the lightning got a little to close for my liking I sprinted down the hill with all my gear so I could get to a lower, more protected spot. Thankfully the storm passed in about 20 minutes but those minutes were pretty terrifying.

The weather did make for a nice sunset at our campsite. 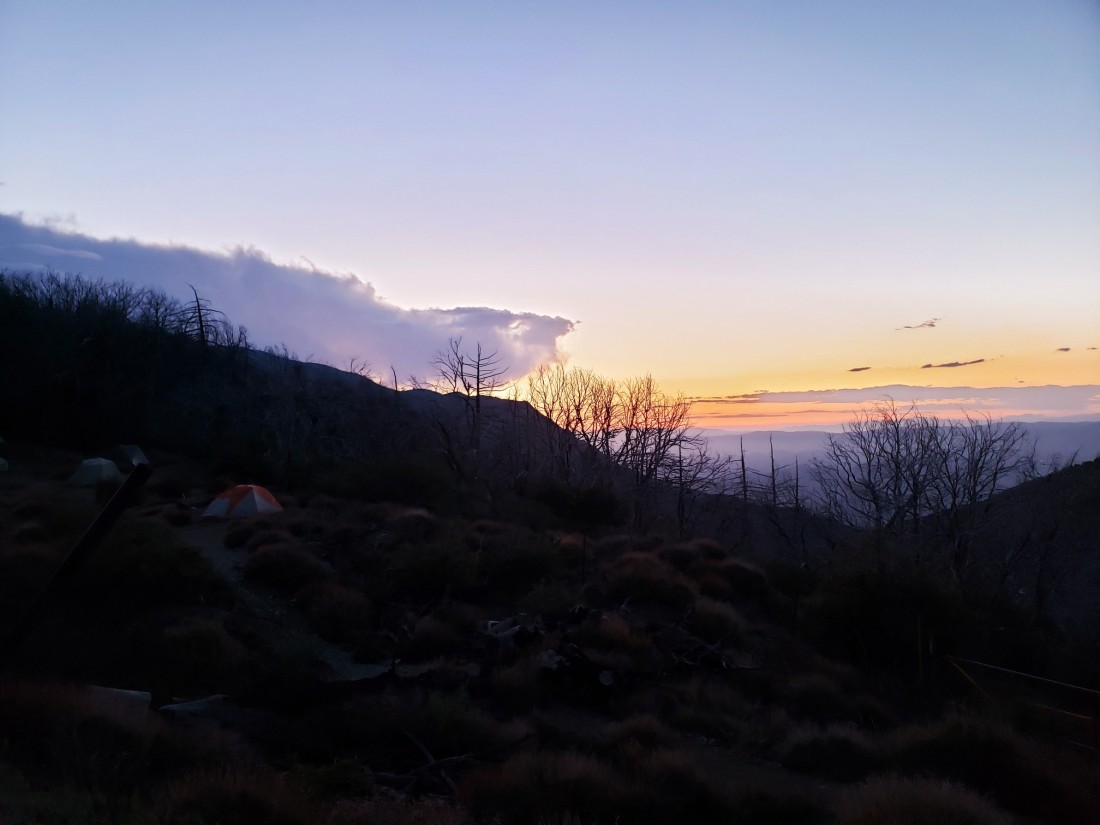 It was a hot, beautiful day for some desert hiking. It had been a few hundred miles since I’d done real desert hiking like this. 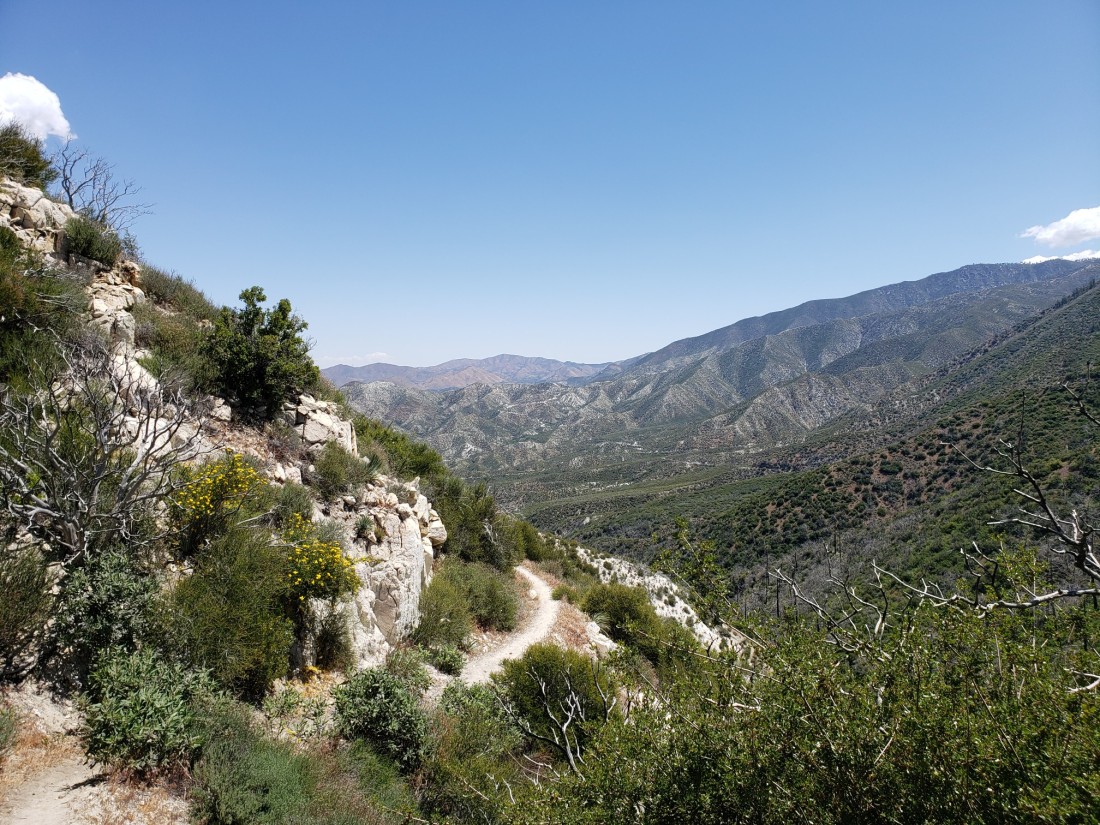 Still, because of all the crazy rain everything was so green. 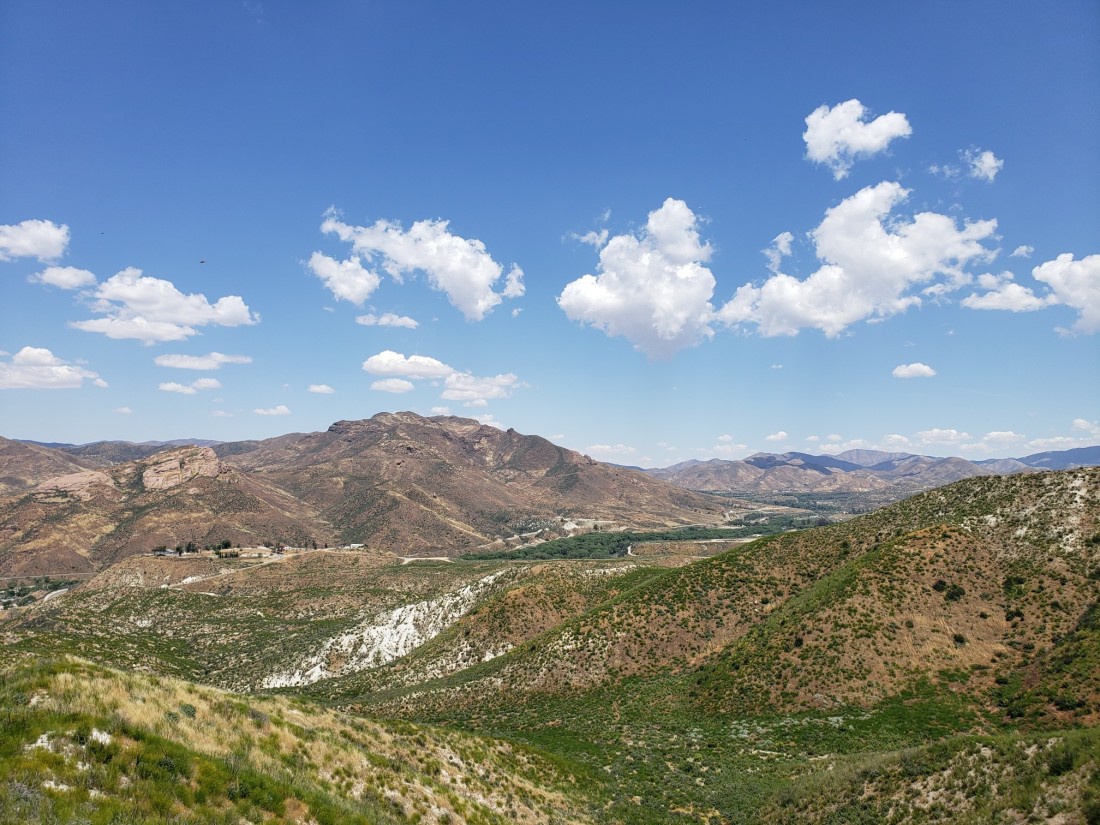 I powered through the 17 miles to the campground since I was really eager to take some time off in LA with my brother and his girlfriend. They came by in the evening and brought some beer for my hiking friends and then I rode back to LA with them.

It felt weird to go from the wilderness to the second largest city in country so quickly but I actually enjoyed it. Oh yeah, my brother got me In-N-Out for the first time and it was amazing.

I’d spend the next few days in LA just resting and hanging out. The first order of business was relaxing in the hot tub at my brother’s new apartment.

It was really awesome coming to LA to spend time with my brother and his girlfriend. So thanks guys for letting smelly me take some time off at your place!

My brother and I went to the science museum in LA which was really fun. I saw the space shuttle up close in person and it was an incredible experience. 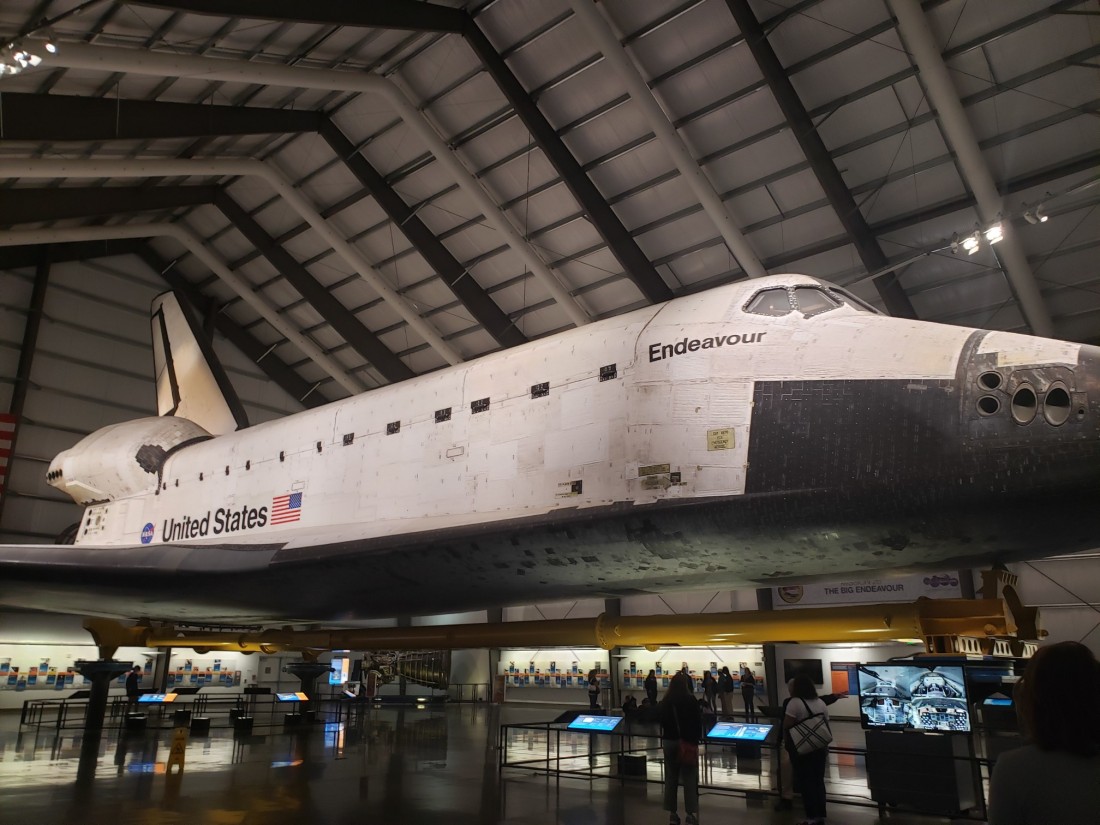 We also saw this animatronic giant which was equal parts creepy and fascinating. 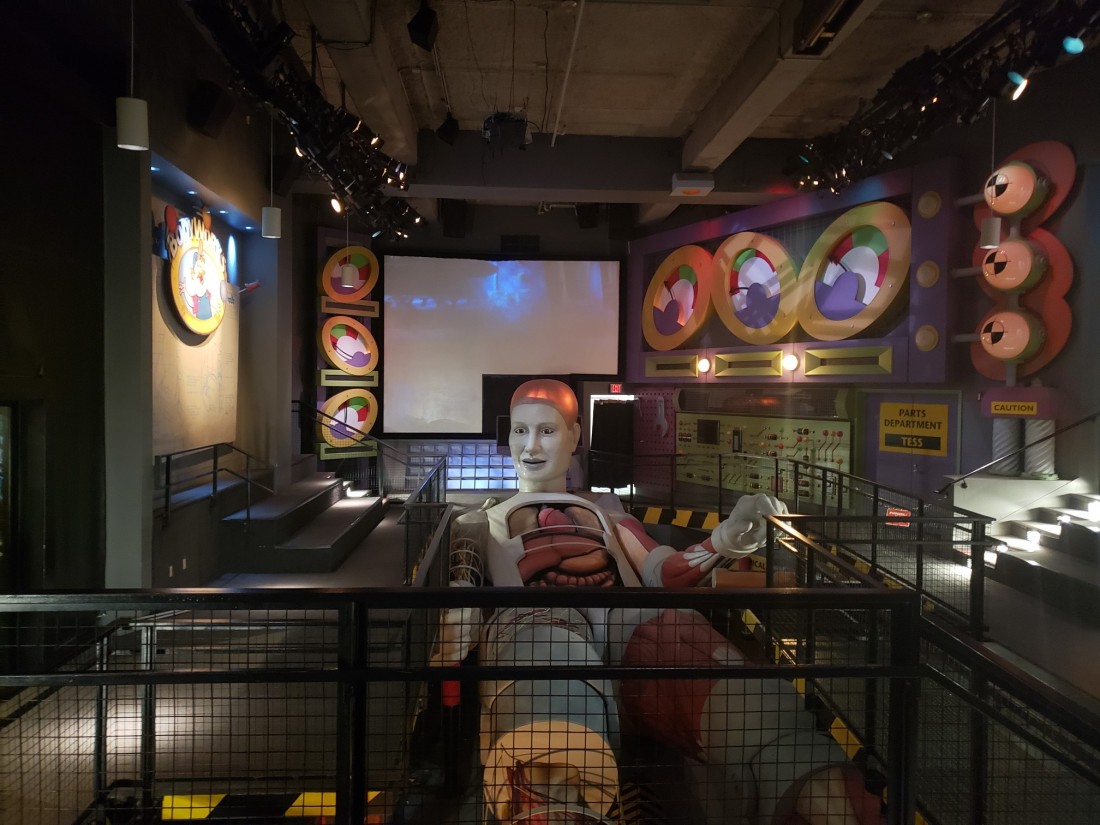 After this my awesome brother took me to REI to replace my worn out shoes and try out some new inflatable sleeping pads. My hips were slowly becoming upset with my thin foam pad.

New shoes on top, look at the wear on the tread and the compression of the midsole. No wonder my feet were starting to feel every rock. 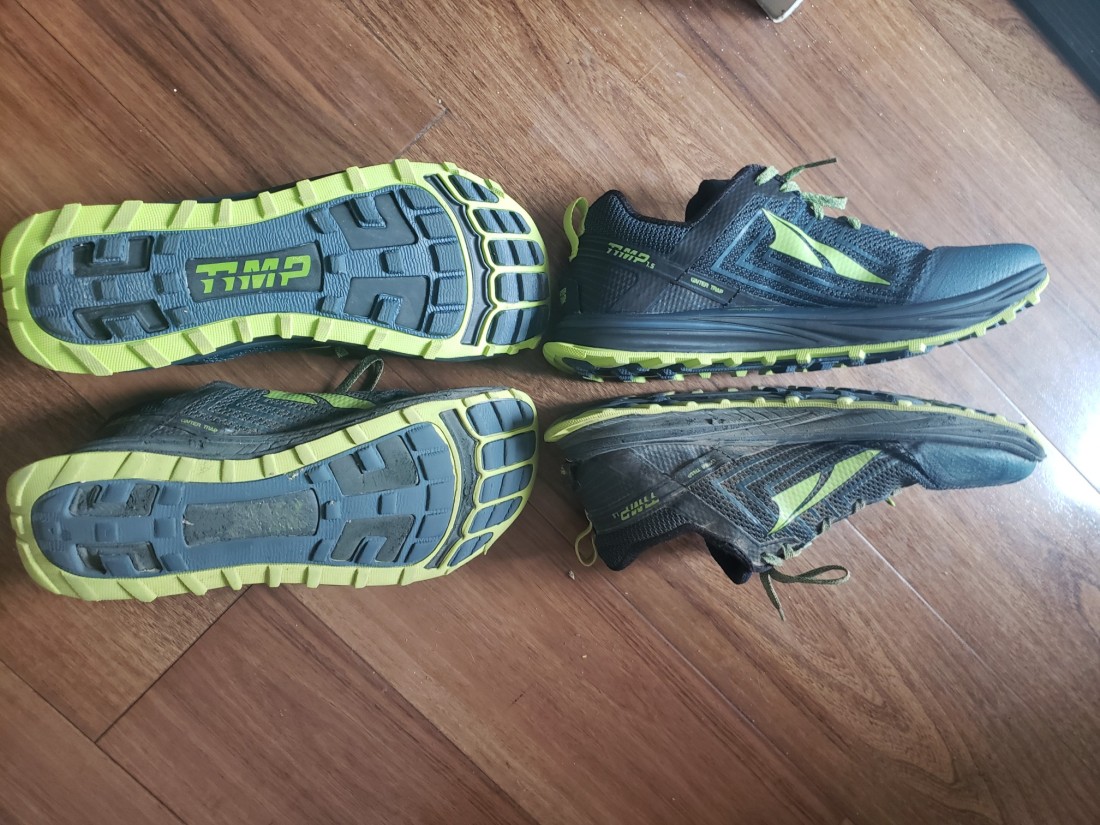 For dinner we had some amazing ramen and I finally got a great night’s sleep since I was out of the wind and rain.

This was definitely one of my laziest days in recent memory as evidenced my the fact that I don’t have any pictures. I just lounged around and relaxed which was exactly what I needed.

I got to see one of my good friends from college which was a nice surprise! If you’re reading this Troy, good luck with everything!

Tomorrow my brother would drop me off at the trail and I’d get hiking again. Hopefully my friends wouldn’t be too far ahead so I could catch up to them again.

View all posts by Adam Dirks