If you’ve noticed, I skipped days 42 and 43 – these were just uneventful zero days in Tehachapi so there’s not much to write about them.

Overall I really enjoyed the town and the food and the people! But to be honest I can’t remember much of what I did except hang out with my friends and eat a lot. There was a great German bakery about 30 feet from my motel so I probably added a few pounds from that place alone.

Regardless, today we left town to get back on trail. I was definitely a little rusty after taking some time off so the first part of the day was a little tough for me. 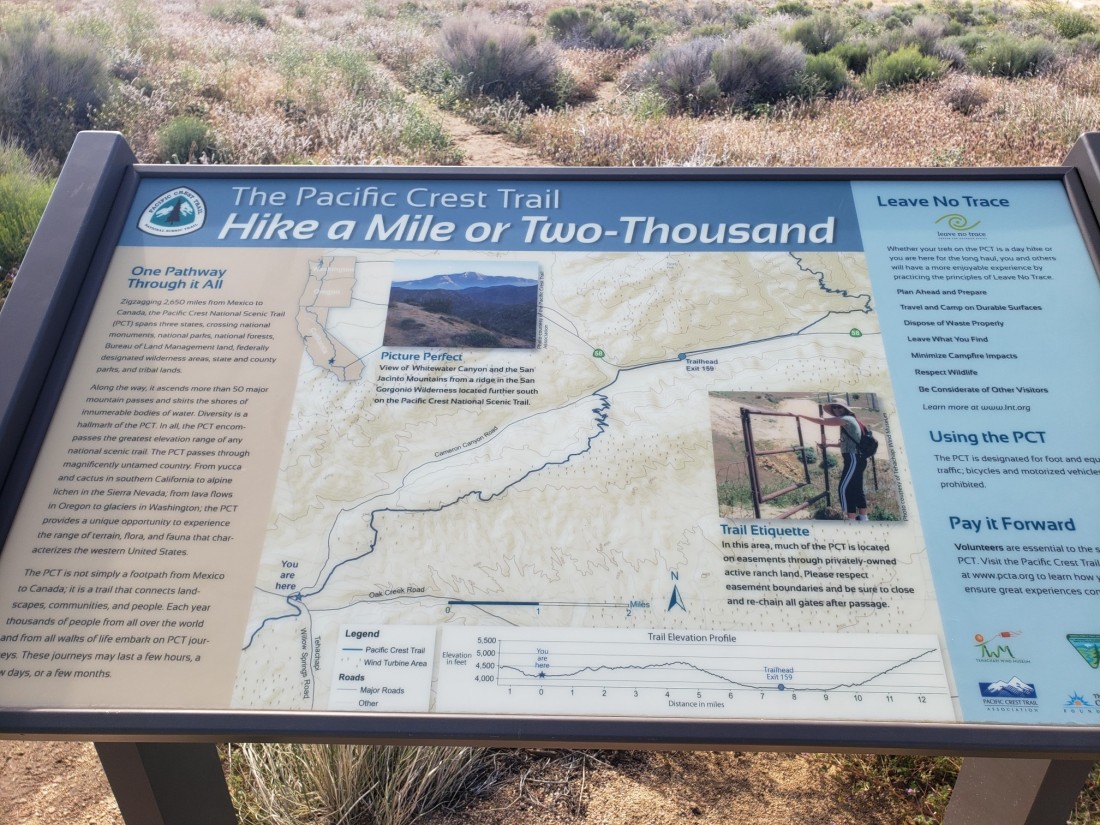 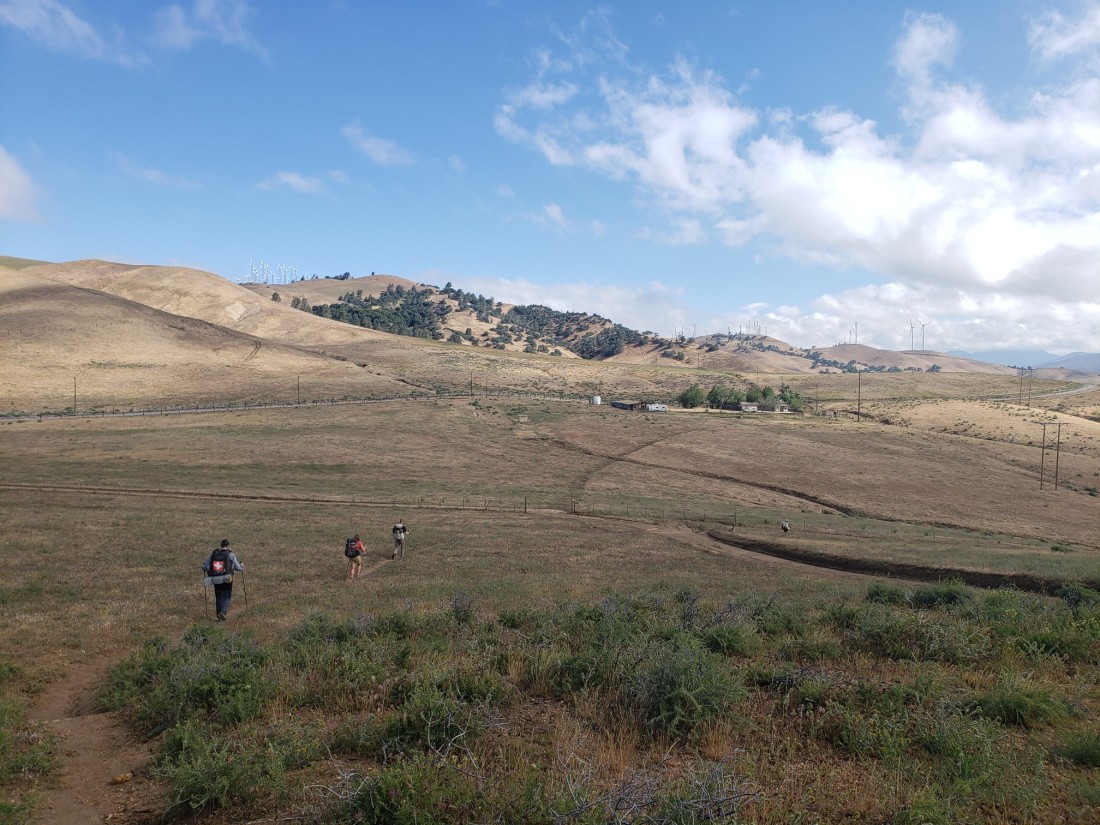 But I soon found my legs and I was making miles again. After a while we descended back down to a major highway which we followed for several miles. It was surreal to see the cars coming so fast in the opposite direction while we moved so slowly.

The weather was perfectly cool and sunny. Unfortunately I had only brought 2 liters of water for this 23 mile dry stretch (thought I had 3 which would have been enough). But the weather was nice and I wasn’t sweating much.

We had a massive climb back up from the road so I ended up drinking most of my water there.

Back in the mountains things were cooler and the uphill was over so I made it to the campsite as I just ran out of water. Our campsite had a great spring and trough – the constant flowing sound was a great sleep aid as well. I’d done 25 miles today, my longest day yet, so I needed some good rest.

We woke up to another beautiful day. Sunny and just warm enough to be comfortable hiking in. 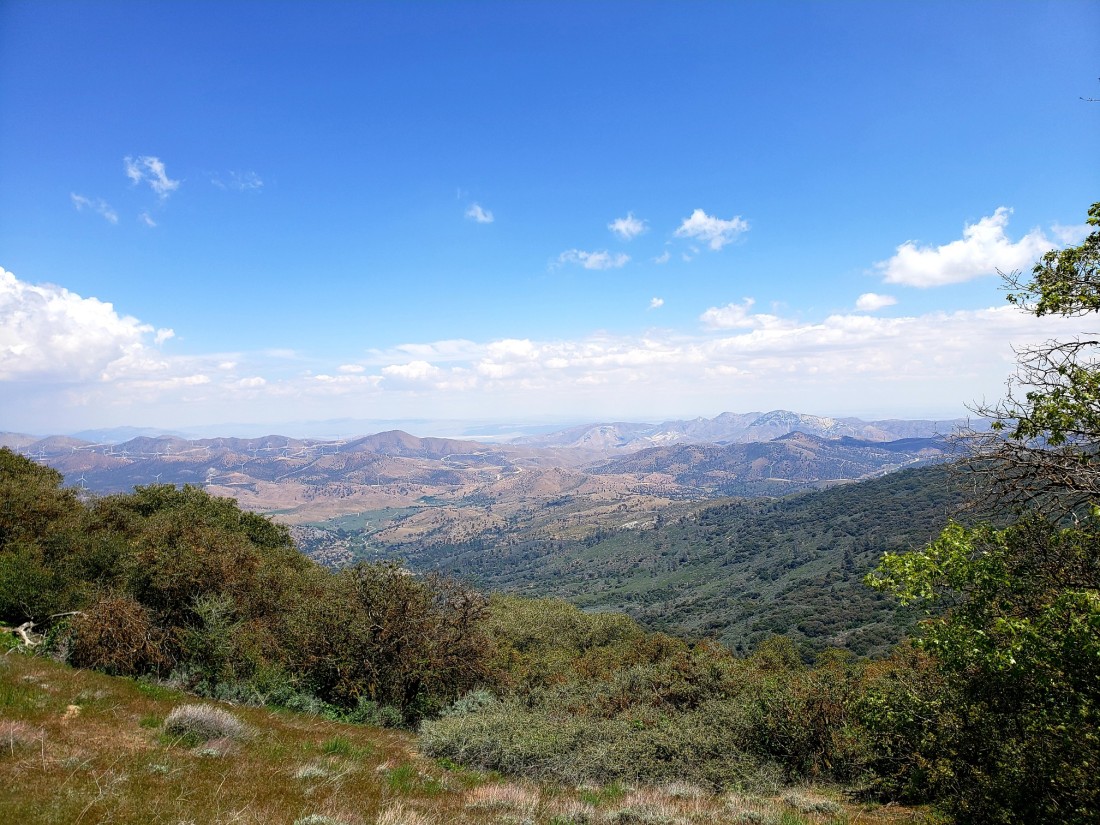 All day we pretty much just went up and down smaller mountains. Several times we passed through some amazing pine forests, in one of which I took maybe the best nap of my life. The weather and environment were just so perfect. 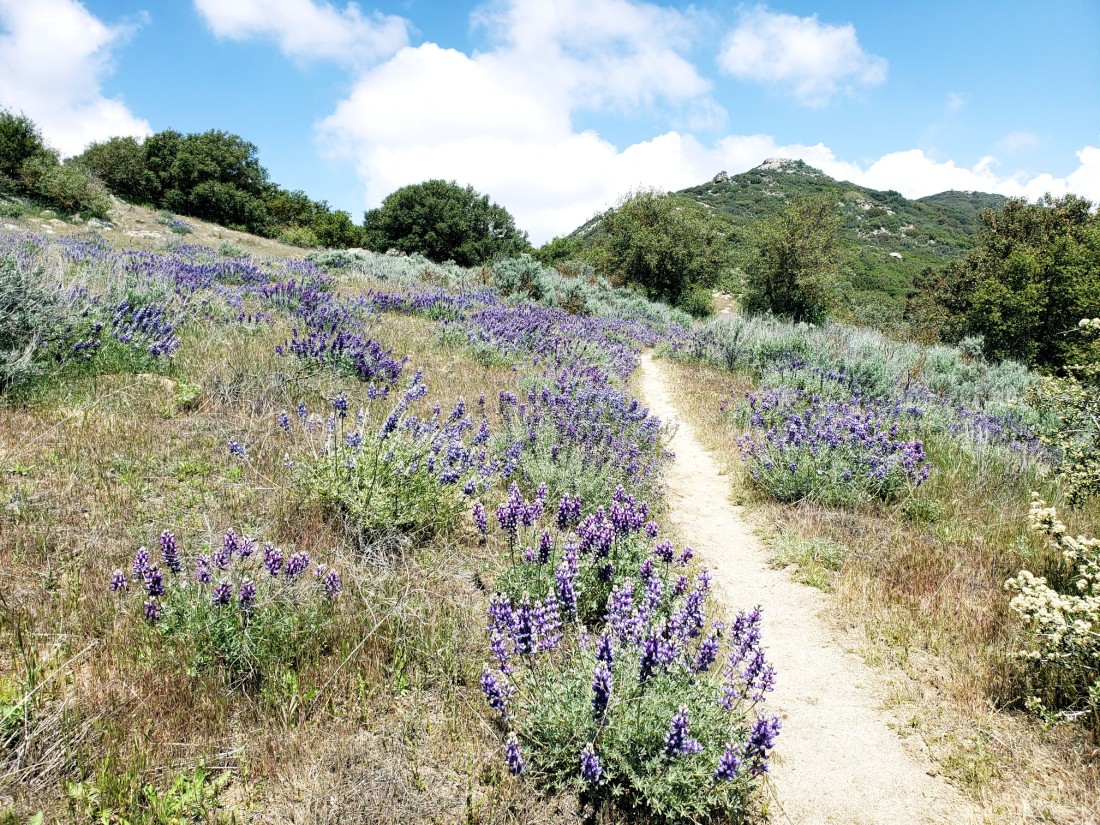 Towards the end of the day we started to see some ominous clouds forming in the distance. Apparently the forecast for tonight called for snow at higher elevations so we decided to hike on a little where it would be lower and warmer.

We camped in a nice open pine grove which was protected from the wind and near a creek. We knew tomorrow would likely be very cold and there was a high probability of getting some adverse weather.

Well today way certainly a surprise. Waking up, we could tell it was going to be a very cold day – maybe the coldest yet. And even as we hiked into the morning it showed no sign of warming. I’d wager temps were hovering around the upper 30s for most of the morning until noon or so.

It was quite nice actually, very comfortable to hike in since the wind wasn’t bad at all. After a few hours we saw some ominous clouds moving in. I wonder what they would bring?

Yeah, you guessed it. Snow – in late May.

After the 15 minutes of snow I descended very quickly to the desert below where things were much warmer and drier.

Seriously, I took this picture maybe 2 hours later – that’s how fast things can change out here. One minute you’re getting snowed on, the next you’re in the desert surrounded by Joshua trees and cacti. As always the desert had beautiful flowers.

I had to walk a little farther than my group to find a tent site for myself but I’m so glad I did. I came across this amazing old Joshua tree and there was a perfect flat spot nearby to pitch my tent. A small part of me was worried that if a strong wind blew through at night one of the spiky ends of the Joshua tree might blow off and land on me in my sleep. 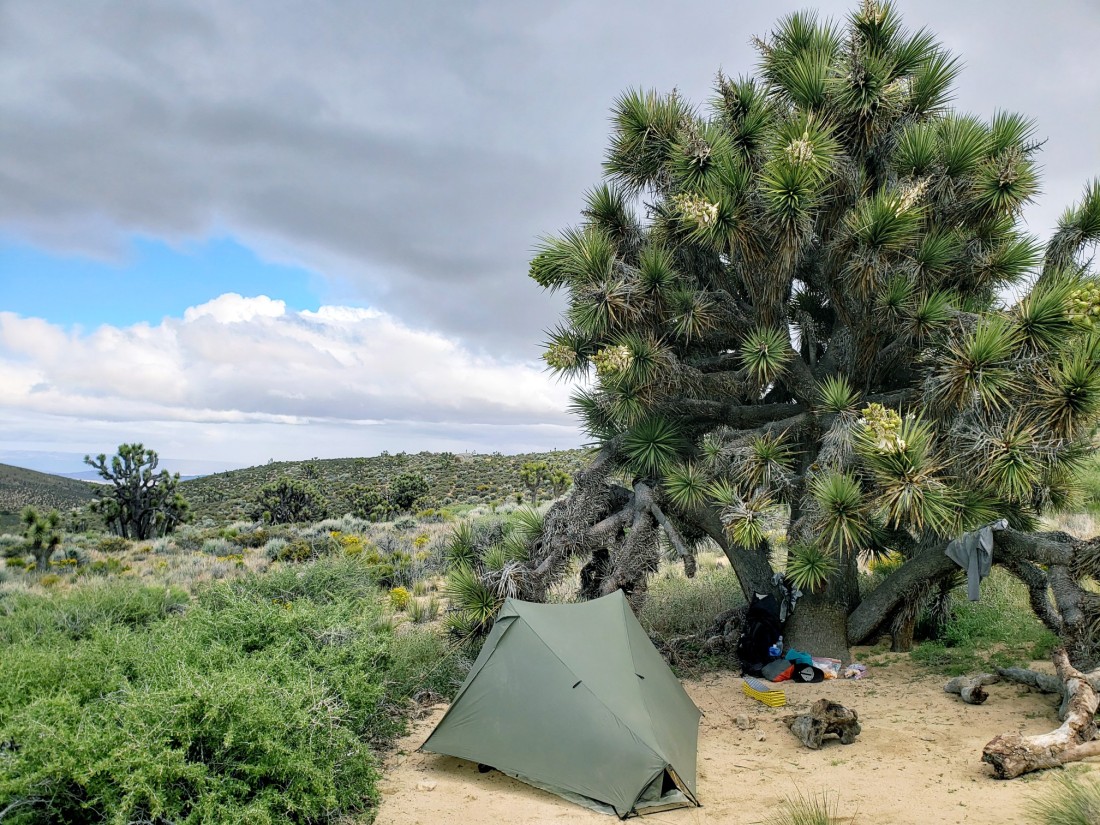 Well it was a very windy night – and rainy too – but I didn’t get impaled by the Joshua tree. The morning might have been the coldest ever, though. Not only was it below freezing as evidenced by my frozen tent but the wind was unbelievable. I had such a hard time getting out of my quilt because my fingers and face would immediately get so cold and I would crawl back in.

What ultimately got me moving was seeing my favorite hat chewed up by some unknown critter in the night.

Something must have really wanted all the salt from my sweat.

That snowstorm that I briefly hoked through yesterday morning must have come back at night because the mountains behind me were blanketed in fresh snow where none had been the day before.

As I hiked up out of my campsite it was crazy to see the Joshua trees dusted with snow. Since the wind was so strong, only the windward faces of the trees/rocks had snow. 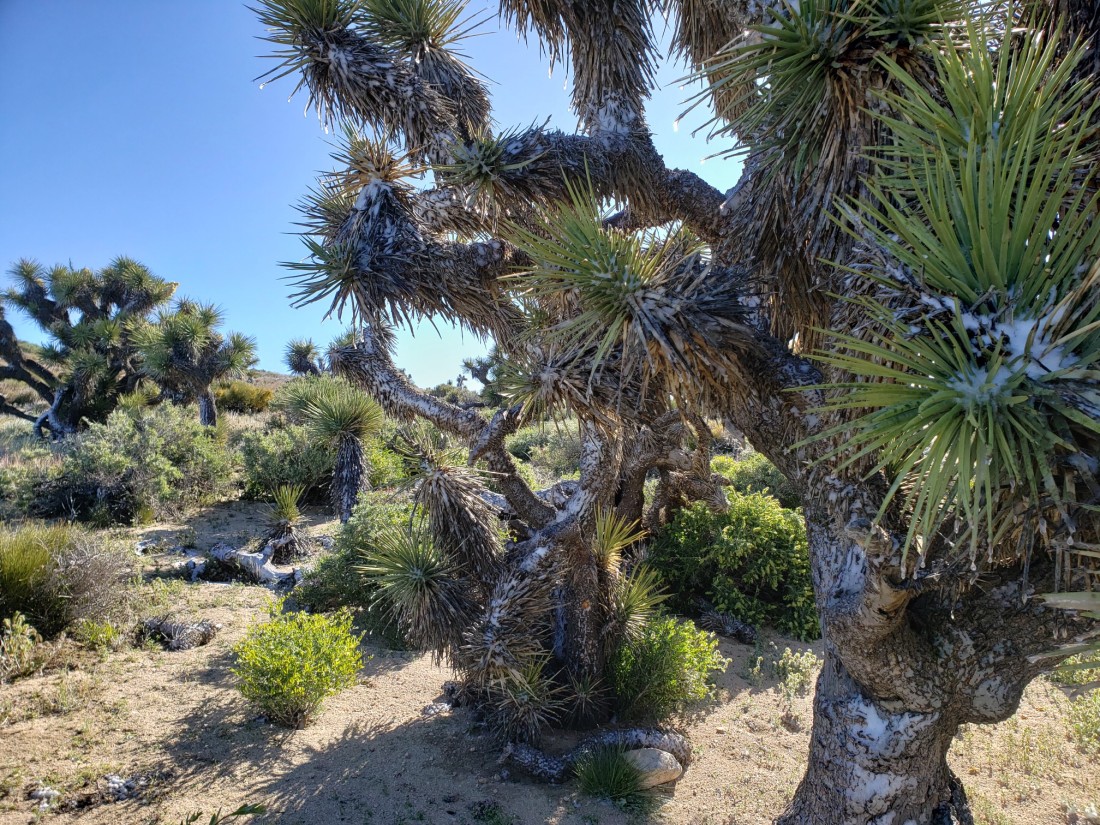 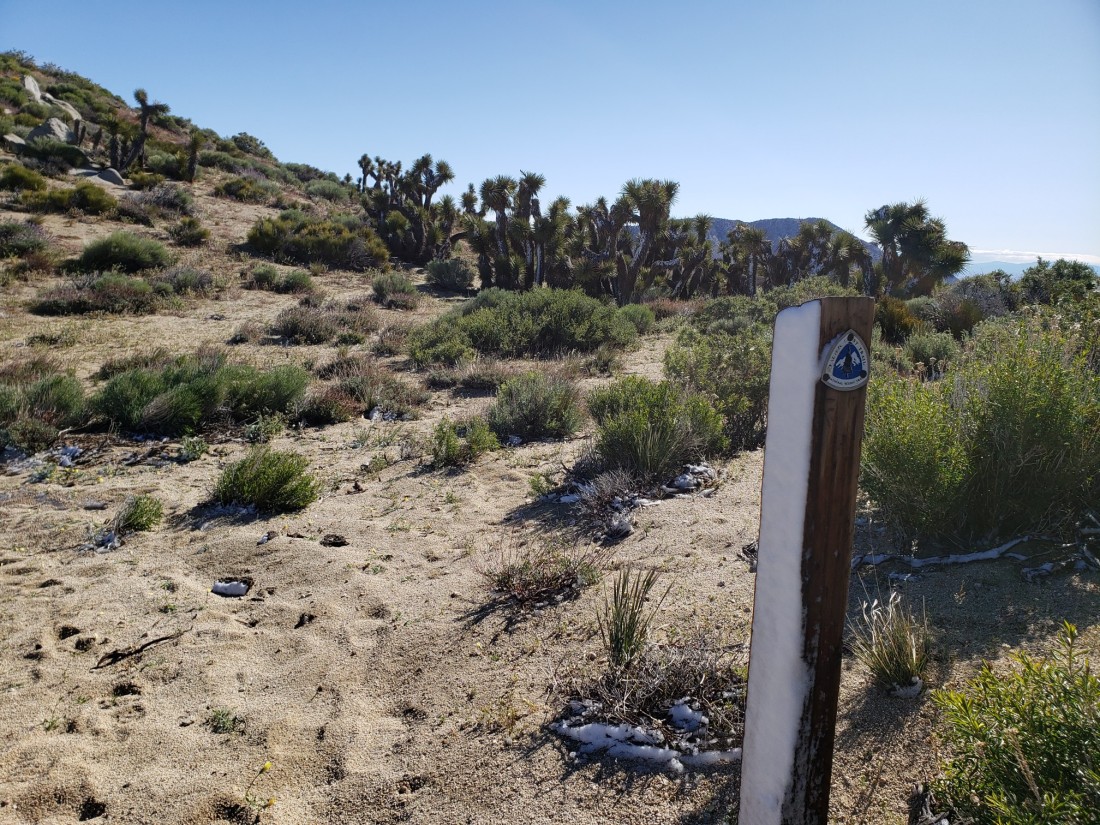 Unfortunately all the snow this far south in the desert meant that the Sierra Nevada mountains to the north were also getting hammered with snow. The rumor was that snow in the mountains was approaching record levels – and I’d be there in just over a week.

But there was nothing I could do about that now so I kept hiking. The wind was amazingly strong and cold but I had a huge climb ahead of me which warmed me up.

In a normal year it often pushes 100 degrees in this section and there isn’t water for close to 30 miles. That’s why trail angels maintain a cache of water halfway through for hikers. Well this year wasn’t normal and it was maybe 45 degrees so we just weren’t drinking much water at all. Most of those jugs were still full. That snow dusted ridge way off in the distance is where we’d be climbing to today. 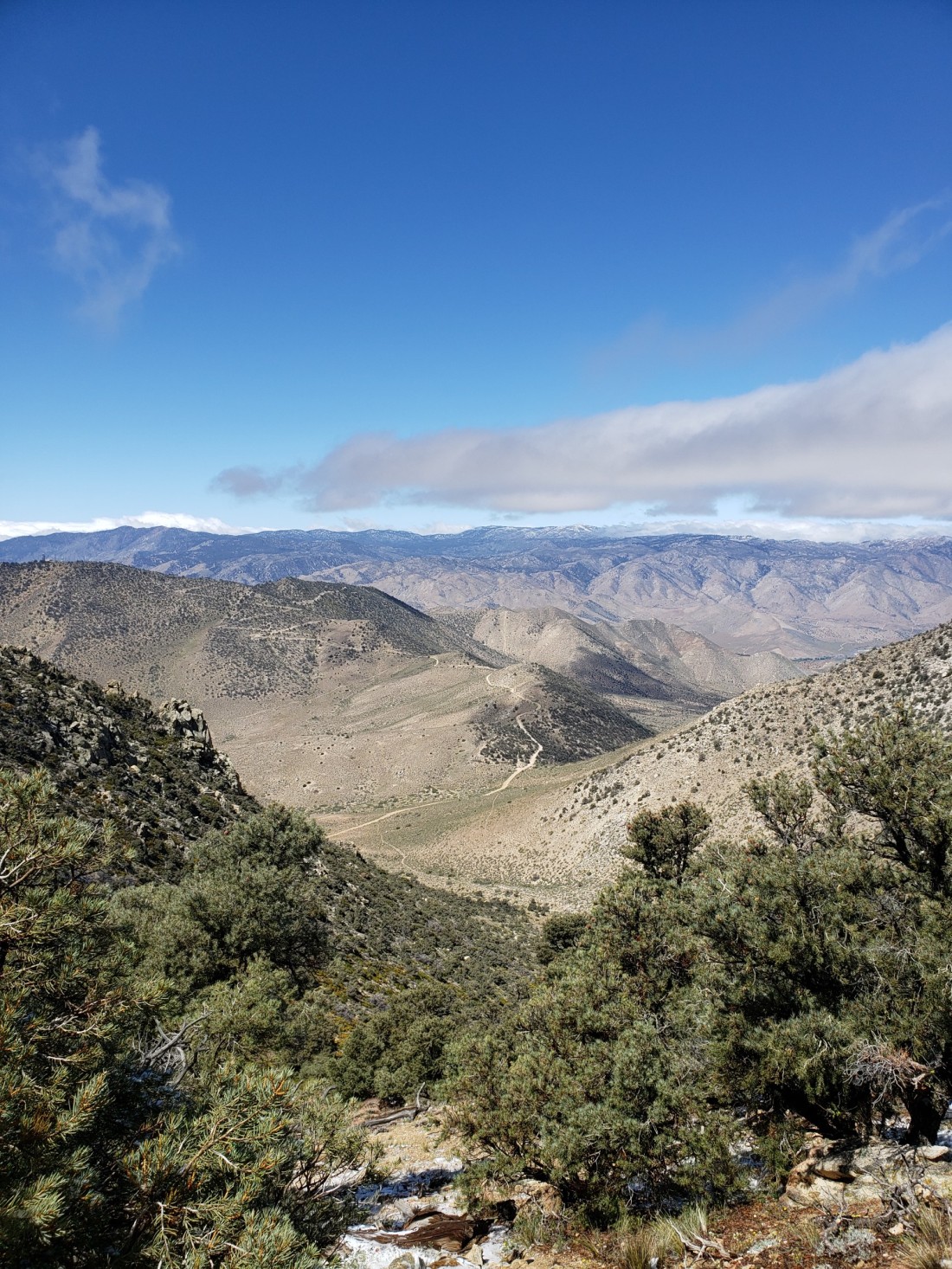 This is the view from the top of the ridge back down to where the dirt road met the trail and where the water cache was located. We climbed over 2000 feet to get this view and there was still plenty of snow from the night before. 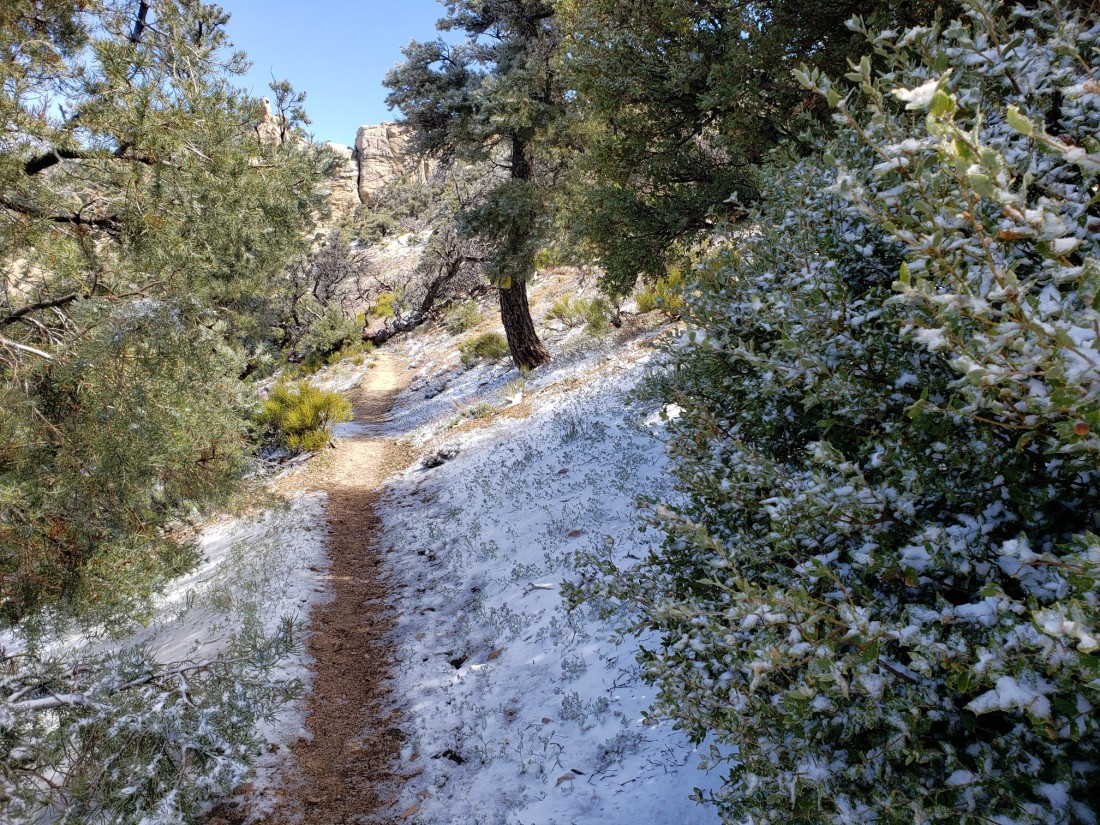 The hike down to the campsite was forested and much warmer. All the snow melted pretty quickly in the desert sun so we were able to camp in a nice dry area.

On a side note, by this point I’d also met back up with most of my friends that I left behind to visit LA so I was quite happy. The serious mountains were just 50 miles away and I wanted to go in with a group I trusted.

We’d all head into town the next morning together. There was rumor of an all you can eat Chinese buffet so we knew we had to get there for lunch.

We hiked fast to get to the buffet. Thankfully we got a hitch to town with 15 minutes of standing by the highway.

Way way off in the distance on the left you can see the snow capped peaks of the Sierra Nevada mountains which we’d be passing through very soon.

Getting into town the first thing we did was get the cheapest motel room we could find and then head over to the Chinese buffet. It was so worth it.

We also got some snacks at the grocery store across from our hotel. While there, we were approached by a lady who was the curator of the local museum which we passed on the way to the buffet. She recognized us as hikers and asked if we wanted a free tour tomorrow morning! Of course we said yes, after all we really didn’t have plans tomorrow and I love musuems.

Our zero day started with Dennys (which my European friends loved) and then moved to the Dollar Tree next door while we waited for the museum to open.

Andrea, the art curator we met at the grocery store the day prior, met us at the museum and led us on our free tour. It was a really great museum for being in such a small town and I could tell how much love and attention was put into it. She even took us out back and let us practice throwing spears using the atlatl, a traditional Native American hunting tool.

I wasn’t very good but it was so much fun just chucking spears across the street from a Home Depot.

So thank you Andrea for the awesome tour – we loved the museum and the chance to learn about the history of the area!

After the museum fun we got some more food, hung out in the room for a little while, and then resupplied for the next stretch. In just three days we’d finish the desert and be at the doorstep of the majestic Seirra Nevada mountains.

View all posts by Adam Dirks